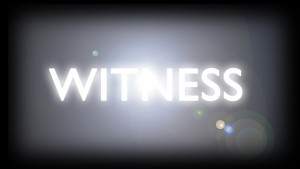 Since Jesus needed God’s testimony for him, he cannot be God

The Witness in Islam

Though many people are described as “Witness” in the Qur’an, this description is also given to God (called “Allah” in Arabic) as one of His names and attributes with only one difference, that is, God is a crucially credible witness, Whose testimony can only be reliable, unlike human beings.

There are many verses where God is described as “Witness”. For example, we read:

Say, “What thing is greatest in testimony?” Say, “Allah is Witness between me and you. And this Qur’an was revealed to me that I may warn you thereby and whomever it reaches. Do you [truly] testify that with Allah there are other deities?” Say, “I will not testify [with you].” Say, “Indeed, He is but one God, and indeed, I am free of what you associate [with Him].” (Al-An`am 6:19)

The Qur’an quotes Jesus as saying on the Day of Judgment:

I said not to them except what You commanded me – to worship Allah, my Lord and your Lord. And I was a witness over them as long as I was among them; but when You took me up, You were the Observer over them, and You are, over all things, Witness. (Al-Ma`idah 5:117)

The Witness in Christianity

That is why the New Testament quotes Jesus as saying that his testimony may not be true but that of God (called “Father” in Christianity) is certainly true. We read: “If I testify about myself, my testimony isn’t true. There is someone else who testifies about me, and I know his testimony about me is true. You sent a delegation to John, and he testified to the truth. Although I don’t accept human testimony, I say these things so that you can be saved.” (John 5:31-34)

Since Jesus needed God’s testimony for him, he cannot be God for God does not need the testimony of the others. Rather, it is His testimony which is needed by others.