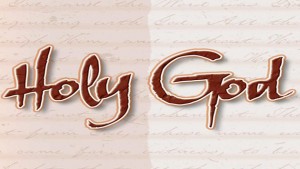 Since God is He Who makes others holy including Jesus himself, Jesus cannot be God

One of the names and attributes of God is “the Holy One”. It is He Who is the source of holiness and Who makes His creatures holy.

The Holy One in Islam

In the Qur’an, God (called “Allah” in Arabic) is described as “Holy”. We read:

God is He save whom there is no deity: the Sovereign Supreme, the Holy, the One with whom all salvation rests, the Giver of Faith, the One who determines what is true and false, the Almighty, the One who subdues wrong and restores right, the One to whom all greatness belongs! Utterly remote is God, in His limitless glory, from anything to which men may ascribe a share in His divinity!(Al-Hashr 59:23)

Prophet Muhammad used to use “Holy” as one of the names and attributes of God both during and after his prayers. For example, Ubay ibn K`ab reported that after Prophet Muhammad finished the voluntary three-unit (Witr) prayer, he would say: “Glory be to the King, the Holy!” three times (Imam Ahmad)

Also, `A’ishah reported that while Prophet Muhammad was bowing down or prostrating himself in prayer, he would say: “All Glorious, All Holy, Lord of the Angels and the Spirit!” (Muslim)

The Holy One in Christianity

In the Bible, God is often described as “Holy”. For example, in the New Testament, before the birth of Jesus, Mary, the Virgin, is quoted as describing God as “Holy”. We read:

Mary said, “With all my heart I glorify the Lord! In the depths of who I am I rejoice in God my savior. He has looked with favor on the low status of his servant. Look! From now on, everyone will consider me highly favored because the mighty one has done great things for me. Holy is his name. (Luke 1:46-49)

We read: Jesus replied, “Isn’t it written in your Law, I have said, you are gods? Scripture calls those to whom God’s word came gods, and scripture can’t be abolished. So how can you say that the one whom the Father has made holy and sent into the world insults God because he said, ‘I am God’s Son’? (John 10:34-36)

More than once, the Bible emphasizes that it is God Who makes holy whomever He likes, and that He is the source of holiness. We read: “This is because the one who makes people holy and the people who are being made holy all come from one source. That is why Jesus isn’t ashamed to call them brothers and sisters when he says” (Hebrews 2:11)

The Bible often states that God made and makes many people holy other than Jesus. For example, in the Old Testament, we read: I will meet with the Israelites there, and it will be made holy by my glorious presence. I will make the meeting tent and the altar holy. Likewise, I will make Aaron and his sons holy to serve me as priests. I will be at home among the Israelites, and I will be their God. (Exodus 29:43-45)

In the New Testament, we read: “Keep away from every kind of evil. May the God who gives peace make you holy in every way.” (Thessalonians 5:22-23)

Since God is the Holy One according to both the Bible and the Qur’an, it is He Who makes others holy including Jesus himself, Jesus cannot be God, and it is God Alone Who is the Only true Lord, and Who is the source of holiness.