From Atheism to Christianity to Islam 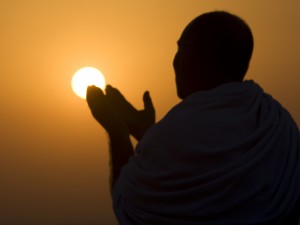 Step by step, I learned that Islam is not a militant religion.

I once knew an atheist who claimed he had never believed in God’s existence. In his view, believers were supposed to be people of weak character who felt the necessity to find a crutch for their inability and laziness, so they attended church. He felt agitated if, when debating religion, he could not persuade the opponent with his arguments. He despised believers in an almost hysterical way. He had, however, a very good friend who believed in God. They agreed to refrain from discussing religion whenever together.

One day this man, probably in a rare moment of weakness, accepted the invitation of his friend to visit his church. To himself, he laughed at the thought of speaking out in the middle of mass and laughing and pointing his finger at the believers from the pulpit. However, as we know, God works in mysterious ways. He went to church, stood in the back benches, and stared at the people praying.

The mass service started and he gave all of them a sarcastic glance. Then the sermon began, lasting about 15 minutes. Suddenly, in the middle of the sermon, tears welled in his eyes. A strange feeling of joy and happiness washed away his animosity, a feeling that engulfed his entire body. After mass, the two friends left together. They were silent until the moment they were to part ways, when he asked his friend whether they could go to church together again. They agreed to go again the next day.

It’s possible some of you might have guessed that I was that stubborn atheist. I had felt nothing but contempt and hatred towards people of faith. But after that sermon in 1989, when the priest discussed how we should not judge others if we don’t want to be judged, my life suddenly took a dramatic turn.

I started attending church services regularly and was thirsty for any information on God and Jesus Christ. I took part in meetings with Christian youngsters where we exchanged our spiritual experiences. I felt resurrected. Suddenly I felt the need to be in the company of believers. I needed to make up for the past 18 years.

I was brought up in an atheist family, who except for having me baptized, did not exercise any attempt to guide my spiritual development. I remember being in sixth grade when a comrade was sent by the Communist Party to explain to us why God does not exist. I remember myself absorbing his every word. In my case, I needed no convincing. I believed everything he said. His arrogance, contempt, and hatred towards believers became mine. But now I had to make up for all those years.

I met with a priest and others who guided me in this new direction. I was full of so many questions, to which they responded. Later, I was to realize a big mistake: I accepted everything without contemplation or reflection. I could say that they explained things to me in a ‘take-it-as-is’ manner, but that would not be fair to them. It was, in fact, my mistake. I didn’t reflect upon their words, nor did I think critically. This would cause me a lot of complications later. In retrospect, I believe an important factor that influenced my behavior was age. I was too young to properly comprehend matters so serious and complicated as faith.

I wished to become a good Christian, and God knows I tried very hard. Yet over time, I could not reconcile the contradictions found in the Bible, such as the divine nature of Prophet Jesus and the concept of inherited sin. Priests tried to respond to my questions, but eventually, their patience began to run thin. I was told that such matters should be accepted on faith, and that these questions were a waste of time and would only serve to distance me from God. Till this day, I recall myself quarreling with a spiritual leader, an event that restarted my self-destructive tendencies. Maybe I wasn’t right after all. I was young.

How I Became Muslim

My path toward Islam wasn’t easy at all. You may think that since I was disappointed with Christianity, I would have immediately accepted Islam as my faith. This could have been very simple, but all I knew about Islam at the time were things like Muslims refer to God as Allah, they read the Qur’an instead of the Bible, and they worship somebody called Muhammad. Also, I think I was not yet ready to accept Islam.

So I withdrew from the church community and claimed to be a soloist Christian. I found out, however, that even though I didn’t miss the community of believers or church, God was ‘settled’ so deep in my heart that I couldn’t let Him go. I didn’t even try. Quite the opposite. I felt happy to have God around and hoped He was on my side.

Later I began to engage in one stupidity after another, living a life of luxury and lust. I did not realize that such a road would lead me away from God and towards hell. A friend of mine says that you need to hit rock bottom in order to feel the ground beneath your feet. This is exactly what happened to me. I fell really deep. I can just imagine how Satan must have been waiting for me with open arms, but God did not give up on me and gave me another chance.

In July 2001, I met a young man from Iraq. His name was Ibrahim. We very quickly struck up a conversation. He told me that he was Muslim, and I responded that I was Christian. I was worried that my being Christian would be a problem, but I was wrong. I was glad to be wrong. It was interesting that I did not want to become Muslim and he did not try to convert me.

Although I considered Muslims an exotic group, I had been interested to learn more about Islam. It was a good opportunity to learn more. I realized that I had in front of me a man who could teach me a lot about Islam, so I mustered the courage to ask him to do just that. That was my first meeting with Islam, indeed my first step. After some time we parted ways, and I did not see him again, but the seed had been sown.

I remember once reading an interview with Mohammad Ali Silhavy (an old Czech Muslim) and being eager to find his address and write him a letter. Then came September 11. Because of the political climate, I thought it might not be an appropriate time to contact Mr. Silhavy. So I found myself at a dead end.

About two months later, I found the courage to write a long letter to Mr. Silhavy. After a while he replied and sent a package including Islamic literature and leaflets. He told me that he had informed the Islamic Foundation in Prague about me and asked them to send me the translation of the Qur’an. So this was my beginning. Step by step, I learned that not only is Islam not a militant religion, but to the contrary, it is a religion of peace. My questions were answered.

Because of certain circumstances, it wasn’t until three years later that I decided to visit Mr. Silhavy. He showed a lot of patience while explaining to me different issues, and suggested that I visit the mosque of Brno (Czech Republic). When I went to the mosque of Brno, I was afraid that I would be seen as a stranger, an outsider. How surprised I was to find quite the opposite. I met K. and L., who were the first persons to help me. Of course, I met other brothers who welcomed me in the warmest possible way.

I began to delve into all aspects of Islam, and found how understandable and logical Islam is. I gradually started to learn how to pray, and today I master Prayer with no problem, even in Arabic. I gave up a bad habit of mine that was not compatible with Islam. I was a gambler and a very good one indeed. It was a difficult struggle with myself, but with God’s help I won that battle.

If I ever doubted my interest in Islam or whether I could live as a Muslim, I know now that my interest is permanent and I consider myself one of them. Maybe it looks very simple, but again with God’s help I won this internal struggle. I thought carefully before I definitively decided to embrace Islam. To be honest, throughout 2003 and the beginning of 2004, I was not completely sure if I could manage this. Finally I decided definitively. I am not that young man from the early ’90s anymore.

That’s why today I feel very happy that I am Muslim. I finally feel free. I still have my imperfections but I am trying to improve upon them. I believe that God will help me. Now, listen to what I want to tell you and consider this my obligation: I believe in my heart and declare by word that there is no other god but God and Muhammad is God’s Messenger.