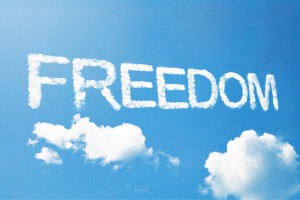 Freedom denotes release and possession of will but with righteous word and noble manner.

This valuable word that poets eulogized and wise men recommended and for which bloods have been shed is derived from the word “hurr” which, according to the Arabs, is an antonym to “salve” denoting the person who has full control over his affairs. But he is also the person who has good manners; because the word “hurr” (i.e. free) represents values which denote the best of everything. It also indicates good work and favorable deed.

In the light of the linguistic definition, we can deduce that freedom in the Arabic concept denotes release and possession of will but with righteous word and noble manner.

No wonder that freedom could turn to be wrongdoing if it does not wear the garment of virtuous manners. Thus, it becomes worthy of the words of the French Madam Rolland who said when she saw the violations of the French Revolution under the banner of freedom “O freedom! How many crimes have been committed in your name!”

Freedom is parallel to and matches equality. Therefore, the erudite scholar Ibn Ashur considered it, in a sense, as a result of equality in his book al-Maqasid where he underscored equality in the following way:

Equality in legislation for the ummah (Muslim nation) takes in consideration people’s equality in creation and its ramifications on the basis of which distinction has no effect with regard to the welfare of the world. People are equal in terms of humanity “You all belong to Adam” and in terms of the right to live in this world according to natural disposition. Their difference in color, form, race, and home country should have no effect in this regard.

Islam has combined between the objectives of spreading freedom and preserving the general system by giving the reasons of freedom supremacy over the reasons of slavery. Islam abolished many of the reasons of slavery such as one’s selling of his children and enslaving the criminals as practiced by the Arabs and the creditors as practiced by the Romans as found in the Solon’s Greek laws and in the Torah. In chapter 4 of the Kings 2, “a woman came to complain for Prophet Elijah that her husband died and the usurer came to take two of her children for the debt.” This indicates that enslaving people for debts was in the laws of Moses (peace be upon him).

Thus, surveying these procedures, it becomes clear that the Shariah aims at emancipating slaves. Muslims emancipated many slaves and from among them were masters, imams, scholars and masters of the recitations of the Quran.

Over history there were incidents of collective emancipation as happened in Morocco in the 11th century during the reign of king Islam`il of Morocco by a fatwa from scholars on the basis of the rule that “the lawgiver’s aims for emancipation.” (See in this regard A-Istiqsa fi Khabar Al-Maghrib Al-Aqsa)

Freedom has many manifestations including freedom of speech, freedom of opinion and of practicing ijtihad (legal reasoning), the principle of enjoining what is good and forbidding what is evil, and the thriving of different opinions.

In the first three centuries of Islamic history scholars spread their fatwas and schools of juristic opinions and each group supported their opinion with evidences. This never gave rise to bad feelings or rancor. Jurists themselves were keen to give opportunity to those who disagree with their opinions. Abu Ja`far al-Mansur offered to force people to adopt Malik’s book Al-Muwatta’ to abide by it. He said, “O Malik! I would like to make copies of your books and send them to each country commanding them to act according to them and never to go beyond them.” Imam Malik said, “O Commander of the Believers! Do not do this, for other opinions have reached people and they heard other hadiths; and thus each group adopted what they received from among the different opinions of the Companions of the Messenger of Allah (peace be upon him) and others. In fact, it is difficult to turn them away from this. So, leave people and what they have.”

This is a wonderful attitude that shows this Imam’s keenness to preserve freedom of opinion and the practice of ijtihad (legal reasoning). This attitude has made him issue a fatwa concerning the oaths of paying homage to the ruler that the divorce of the one under coercion is not enforceable. This incurred the wrath of the ruler upon him in addition to the punishment which he suffered but did not take back his opinion.

Source: Taken with modifications from: binbayyah.net