One of the frequently asked questions concerning prayer is about whether a person may or may not perform prayer at those times when performing prayer is reprehensible.

To better understand this issue, we need to give a brief overview of a very well-known legal issue.  How can scholars reconcile it when there are two Shari’ah commands: one bids you to do an act of worship while the second bids abandonment? 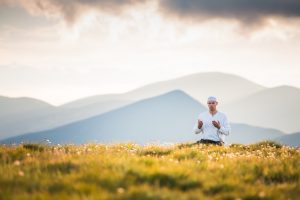 To answer this, let us consider the following two hadiths as an example:

1. Abu Huraira is reported to have said that the Messenger of Allah (Allah bless him and grant him peace) prohibited to observe prayer after the ‘Asr (Afternoon)prayer till the sun is set, and after the dawn till the sun rises. (Muslim)

2. Abu Qatadah (Allah be pleased with him) reported:

The Messenger of Allah (ﷺ) said, “When anyone of you enters a mosque, he should perform two rak’ahs (of voluntary prayer) before sitting.” (Al-Bukhari and Muslim)

If it happens that a Muslim enters a mosque after performing either the ‘Asr (Afternoon Prayer) or Fajr (Dawn Prayer), which hadiths of the two mentioned above may he or she follow?

Some scholars prefer giving priority to the command which bids abandonment. To support their opinion, they quote a hadith related by Abu Hurairah (Allah be pleased with him). The Prophet (Allah bless him and grant him peace) says as part of this hadith:

To clarify this, they say that the command which bids a person “not to do” in this hadith is more certain than the command “to do” which depends on ability.

Moreover, Ibn ‘Umar and Ibn ‘Abbas (Allah be pleased with both of them) are reported to have prevented people when they saw them perform prayer after ‘Asr (Afternoon Prayer)

The second opinion is that a person may perform prayer at such times so long as there is a reason for performing them. This is the opinion of the Shafi’i school of Fiqh. For them, the reasons which allow a person to perform prayers at those times when prayer is reprehensible include the following:

Whenever a person performs wudu’ (ablution), he or she is recommended to perform two rak’ahs of voluntary prayer. This legal ruling only applies in case there is no other (fard) obligatory or (sunnah) recommended prayers to be performed. If the time is due to perform either fard or sunnah prayer, then it is correct to only perform the fard or sunnah prayers. The idea behind that is to always perform prayer after ablution whether it is obligatory, recommended or voluntary. However, we perform these two rak’ahs of voluntary prayer in case there is no other obligatory or recommended prayer to perform. Abu Hurairah (May Allah be pleased with him) reported:

The Messenger of Allah (ﷺ) said to Bilal (Allah be pleased with him) “Tell me about the most hopeful act (i.e., one which you deem the most rewarding with Allah) you have done since your acceptance of Islam because I heard the sound of the steps of your shoes in front of me in Paradise.” Bilal said: “I do not consider any act more hopeful than that whenever I make Wudu’ (or took a bath) in an hour of night or day, I would immediately perform Salat (prayer) for as long as was destined for me to perform.” (Al-Bukhari and Muslim)

The hadith denotes that a person may perform more than two rak’ahs. However, the scholars who adopt the second opinion mentioned above allows you to perform only two rak’ahs at the times when prayer is reprehensible.

When you enter a mosque to sit in it or read the Quran for example, you should start with performing two-rak’ah prayer. As mentioned above, this legal ruling, also, only applies in case there is no other (fard) obligatory or (sunnah) recommended prayers to be performed. If you enter at the times when prayer is reprehensible, then you may perform two-rak’ah prayer according to Imam Al-Shafi’i or the second opinion mentioned above. Abu Qatadah (Allah be pleased with him) reported:

The Messenger of Allah (ﷺ) said, “When anyone of you enters a mosque, he should perform two rak’ahs (of voluntary prayer) before sitting.” (Al-Bukhari and Muslim)

3. Al-Tawaf (circumambulation around the Ka’bah)

A number of scholars also allow a pilgrim to perform two-rak’ah prayer at any time after circumambulation around the Ka’bah at Makkah. It was narrated that Jubair bin Mut’im said:

“The Messenger of Allah (ﷺ) said: ‘O Banu ‘Abd Manaf! Do not prevent anyone from circumambulating this House and praying at any time he wants of the day or night.” (Abu Dawud, Al-Tirmidhi, Al-Nasa’i and Ibn Majah)

Istikharah is a two-rak’ah voluntary prayer in which you make du’a’ (supplication) asking Allah to guide you to the better of two things. You are recommended to perform it whenever you cannot make up your mind whether to do or not to do a certain deed.

However, these four reasons are but a few examples. There are other reasons such as funeral prayer, Istisqa’ (prayer for rain), etc. Other scholars see that we can wait till such time is up. Look at the conclusion below.

The Times When Prayer is Reprehensible:

1. After Performing the Fajr (Dawn) Prayer until Sunrise

Once you perform the Dawn prayer, you are not allowed to perform any voluntary prayers. So, is it allowed to make up for any missed prayer whether obligatory or recommended?

You may make up for missed prayers either after performing the Fajr prayer or after 15 minutes after sunrise when the time when prayer is reprehensible is up.

2. From Sunrise to about 15 minutes after it

Scholars used to express this as from the very beginning of sunrise until the sun rises up in the sky to the height of a spear. Normally they would estimate this with the naked eye. Narrated Hisham’s father:

3. When the sun is at its highest point in the sky till it leaves the middle of the sky

There were three times at which Allah’s Messenger (ﷺ) forbade us to pray, or bury our dead: When the sun begins to rise till it is fully up, when the sun is at its height at midday till it passes over the meridian, and when the sun draws near to setting till it sets. (Muslim)

However, some scholars hold the opinion that this ruling applies to all days of the week except for Fridays. This means on Fridays, you may perform voluntary prayer when it’s high noon. Abu-Huraira reported Allah’s Apostle (ﷺ) as saying:

He who took a bath and then came for Jumu’a (Friday) prayer and then prayed what was fixed for him, then kept silence till the Imam finished the sermon, and then prayed along with him, his sins between that time and the next Friday would be forgiven, and even of three days more. (Muslim)

4. After performing the ‘Asr Prayer until the sun starts to set

The legal ruling of performing prayer after the fajr prayer also applies here. Thus, it becomes reprehensible to perform voluntary prayers after both the ‘Asr and Fajr prayers. Likewise, you can make up for any missed obligatory or recommended prayer.

5. At sunset till the sun fully disappears below the horizon

However, there is no time when performing prayer is reprehensible during the night.