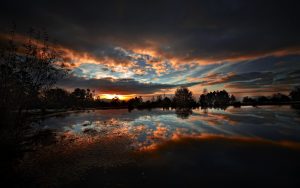 The Day of Rising is the day when each one will stand in God’s presence, and every single deed each engaged in will be disclosed

“And the Hour is coming without any doubt and God will raise up all those in the graves.” (Al-Hajj: 7)

The Day of Judgement is the day the duration predestined for this universe comes to an end. That day, the trial placed upon humanity will come to an end, and this world, the arena of this trial, will reduce to nothing. This is the end promised by God in the Qur’an. That the physical life of the universe will come to an end is a fact confirmed by scientific observation. In the Qur’an, a number of verses that depict the Day of Judgement are as follows:

“So when the Trumpet is blown with a single blast, and the earth and the mountains are lifted and crushed with a single blow, On that Day, the Occurrence will occur and Heaven will be split apart, for that Day it will be very frail.” (Al-Haqqah: 13-16)

On the Day of Judgement, God will raise all people who have died:

On that day, God will gather the people and raise them all:

“God, there is no god but Him. He will gather you to the Day of Rising about which there is no doubt. And whose speech could be truer than God’s?” (Al-Nisa’: 87)

The Day of Rising is the day when each one will stand in God’s presence, and every single deed each engaged in will be disclosed:

“On that Day you will be exposed—no concealed act you did will stay concealed.” (Al-Haqqah: 18)

That day, everyone will receive the reward for their deeds, and God will carry out His infinite justice:

“We will set up the Just Balance on the Day of Rising and no self will be wronged in any way. Even if it is no more than the weight of a grain of mustard-seed, We will produce it. We are sufficient as a Reckoner.” (Al-Anbiya’: 47)

The Day of Resurrection is that time when God will bring an end to the physical existence of the universe, the earth and everything in it. In that moment, God, the Creator of all such laws, will render all physical laws ineffective, unleashing a chain of unprecedented disasters beyond one’s imagination.

A series of very delicate equilibriums make life possible for us in this world. The distance of the world to the sun and the speed at which it spins on its axis are perfectly determined for the sake of man’s survival on this planet. The gravitational force, the atmosphere that serves as a ceiling to protect the earth against celestial bodies that may destruct it, and many other similar systems have been all been specifically created. It is God, the Lord of all the worlds, Who created these finely tuned equilibriums in order to make life possible before even man existed. It is God Who sustains the universe at every moment:

“God keeps a firm hold on the heavens and earth, preventing them from vanishing away. And if they vanished no one could then keep hold of them. Certainly, He is Most Forbearing, Ever-Forgiving.” (Fatir: 41)

“Mankind, have fear of your Lord! The quaking of the Hour is a terrible thing. On the day they see it, every nursing woman will be oblivious of the baby at her breast, and every pregnant woman will abort the contents of her womb, and you will think people drunk when they are not drunk; it is just that the punishment of God is so severe.” (Al-Hajj: 1-2)

“How will you safeguard yourselves, if you are disbelievers, against a Day which will turn children grey?” (Al-Muzzammil: 17)

God informs us what other things will happen on the Day of Judgement:

“When the sun is compacted in blackness, when the stars fall in rapid succession, when the mountains are set in motion, when the camels in foal are neglected, when the wild beasts are all herded together, when the oceans surge into each other, when the selves are arranged into classes, when the baby girl buried alive is asked for what crime she was killed, when the Pages are opened up, when the Heaven is peeled away, when the Fire is set ablaze, when Paradise is brought up close: then each self will know what it has done.” (Al-Takwir: 1-14)