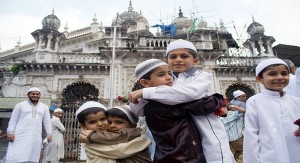 `Eid in Islam is a day of joy, thanksgiving, worship, brotherhood, solidarity, and morality.

`Eid in Islam is a day of joy, thanksgiving, worship, brotherhood, solidarity, and morality. A Muslim should take the advantage of this day to bring himself nearer to Allah, Most High.

The Prophet (peace be upon him) said: “Every nation has its festival, and this is your festival.” Here, he referred to the fact that these two `Eids are exclusively for Muslims.

Muslims have no festivals apart from `Eid Al-Fitr and `Eid Al-Adha. Anas (may Allah be pleased with him) said: “The Messenger of Allah (peace be upon him) came to Al-Madinah, the people of Madinah used to have two festivals. On those two days they had carnivals and festivity. The Prophet  asked the Ansar (the Muslims of Madinah) about it. They replied that before Islam they used to have carnivals on those two joyous days. The Prophet (peace be upon him) told them: “Instead of those two days, Allah has appointed two other days which are better, the days of `Eid Al-Fitr and `Eid Al-Adha.” (Abu Dawud)

These two `Eids are among the signs of Allah, to which we must show consideration and understand their objectives.

1- Fasting: It is haram to fast on the days of `Eid because of the hadith of Abu Sa`id Al-Khudri (may Allah be pleased with him) in which he said that the Messenger of Allah (peace be upon him) forbade fasting on the day of Fitr and the day of Adha. (Muslim)

3- Offering Supererogatory Prayers: There are no supererogatory prayers to be offered either before or after the `Eid Prayer, as Ibn `Abbas (may Allah be pleased with him) reported that the Prophet (peace be upon him) used to come out on the day of `Eid and pray two rak`ahs, with nothing before or after them. This is the case if the Prayer is offered in an open area. If, however, the people pray the `Eid Prayer in a mosque, then they should pray two rak`ahs for Tahiyat Al-Masjid (greeting the mosque).

4- Women Attending the `Eid Prayers: According to the Sunnah of the Prophet (peace be upon him) everyone is urged to attend `Eid Prayer, and to co-operate with one another in righteousness and piety. The menstruating woman should not forsake the remembrance of Allah or places of goodness such as gatherings for the purpose of seeking knowledge and remembering Allah – apart from mosques. Women, undoubtedly, should not go out without the Hijab.

1- Ghusl (taking a bath): One of the good manners of `Eid is to take bath before going out to the Prayer. It was reported that Sa`id ibn Jubayr (may Allah be pleased with him) said: “Three things are Sunnah on `Eid: to walk (to the prayer-place), to take a bath, and to eat before coming out (if it’s `Eid Al-Fitr).”

2- Eating before Coming out: One should not come out to the prayer-place on `Eid Al-Fitr before eating some dates, because of the hadith of Anas ibn Malik who said: “The Messenger of Allah (peace be upon him) would not go out in the morning of `Eid Al-Fitr until he had eaten some dates… and he would eat an odd number.” (Al-Bukhari)

On `Eid Al-Adha, on the other hand, it is recommended not to eat until after the Prayer, when one should eat from the meat of one’s sacrifice.

3- Takbir on the Day of `Eid: This is a great Sunnah of this day. Ad-Daraqutni and others reported that when Ibn `Umar came out on `Eid Al-Fitr and `Eid Al-Adha, he would strive hard in making Takbir until he reached the prayer-place, then he would continue making Takbir until the Imam came.

4- Congratulating one Another: People may exchange congratulations and good greetings on `Eid, no matter what form the words take. For example they may say to one another, “Taqabal Allahu minna wa minkum (may Allah accept from us and from you our good deeds!)”. Jubayr ibn Nufayr said: “At the time of the Prophet (peace be upon him) when people met one another on the day of `Eid, they would say, ‘Taqabal Allahu minna wa minka.’” (Ibn Hajar)

5- Wearing one’s best Clothes for `Eid: Jabir (may Allah be pleased with him) said: “The Prophet (peace be upon him) had a Jubbah (cloak) that he would wear on `Eid and on Fridays.”  Al-Bayhaqi reported that Ibn `Umar used to wear his best clothes on `Eid, so men should wear the best clothes they have when they go out for `Eid.

6- Changing Route on Returning from Prayer-place: Jabir ibn `Abdullah (may Allah be pleased with him) reported that: “the Prophet (peace be upon him) used to change his routes on the day of `Eid.” (Al-Bukhari)