Yesterday, the German Muslim diplomat, writer and thinker Murad Wilfried Hofmann died at the age of 89, after a long struggle with illness and a life full of intellectual work and authorship of important books in modern Islamic thought, including “German-Muslim Diaries” and “Islam as an alternative.”

The Central Council of Muslims in Germany mourned Hofmann, who worked as his adviser, and the council’s statement added that the German Islamic thinker died among his loved ones. 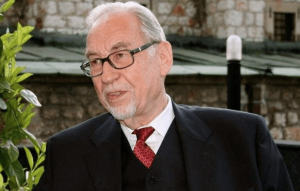 “Islam is a comprehensive religion. It is capable of confrontation. It was able to render education into an obligation and learning into a worshipping.” Murad Hofmann

Dr. Murad Wilfred Hofmann was the ambassador of his country in Algeria and Morocco, born in 1931 to a Catholic family in Aschaffenburg, a large town in northwestern Bavaria, and embraced Islam in September 1980, provoking a controversy because of his high diplomatic status.

Hofmann worked for the German Foreign Ministry from 1961 to 1994, and he specialized in issues related to nuclear defense.

He continued his work as director of information for the North Atlantic Treaty Organization in Brussels from 1983 to 1987, as ambassador to Algeria from 1987 to 1990, and as ambassador to Morocco from 1990 to 1994.

As a result of what he saw in the Algerian war of independence and his admiration for the patience of the Algerians and their understanding of what happened, and his passion for Islamic art, and for what he considered contradictions in the Christian belief that he embraced Islam.

Islam as an alternative

Hofman responds in his book “Islam as an Alternative” to the claim that secular and capitalist democracy is the pinnacle of civilization, and Hofman presented his book to “Westerners who seek to understand Islam on a personal level.”

Hofman converted to Islam on September 25, 1980, and spoke in his book about Islam providing his future vision of religion, and he sees in his book that the twenty-first century is the century of the revival of Islam in Europe.

The book deals with sensitive issues

Although the author presented the book to Western readers, he did not avoid sensitive issues such as the rulings on borders, polygamy of the Messenger, may God bless him and grant him peace, issues of justice, destiny, usury, and the four schools of thought, as well as controversial topics such as succession, Sufism, extremism, women, art, and others.

The book caused a sensation before its publication, just as it was announced that a well-known German publishing house would print it, and Hofmann was exposed to numerous rumors and mutilation campaigns, including from allegations that every woman in the German Foreign Ministry working under the Hofmann administration would be forced to wear the hijab.

Without reading the book, some writers and politicians attacked Hofmann by claiming that his ideas were inconsistent with the German constitution, and the German Foreign Ministry asked him to provide a statement about his views, and in the end the book was issued with the presentation of a prestigious German academy that praised the book, which sparked a long debate on the pages of German newspapers and books.

In his diaries, the first Arabic translation of which was published by the Al-Ahram Center for Translation and Publishing in 1985, Hofman deals with his journey of pilgrimage and the positions that occurred to him with Muslims in the West and the Islamic world, and expressed it by saying, “Brotherhood in Islam has no borders.”

It is noted in the diaries that Hofman dealt with Islam as a religion and belief more than it dealt with the reality of Muslims, and the German thinker believes that Islam can fill the vacuum created by the West’s departure from the Church to atheism.

He says in the introduction to his book, “It is inevitable that the newcomer to Islam will see his country in a new light that requires him to conduct a dialogue with himself, and this is in fact the subject of this book.”

In his discussion of Al-Madina newspaper, Hofman shows in the book that he is surprised that Western and Muslim diplomats alike have been unable to find common ground in them between them against a legal background.

In the book, he discusses the philosophical controversy between Abu Hamid Al-Ghazali and Ibn Rushd Al-Andalusi, after he read translations of their books, and also takes notes on Ibn Khaldoun’s study of the human meeting and compares it with Western philosophers such as Nietzsche, Hagel and Rousseau.

In the notes, Hofmann appears to be a fugitive from a Western material society and a searcher in Islam for lost spirituality. He criticizes the incarnation of God in Christianity in exchange for the abstract and monotheistic concept of deity in Islam.

Islam Hofman came as the culmination of a long process of research, reflection and comparison between religions and modern philosophies studied by a law scholar from Harvard University and doctorate from the University of Munich, and he also has a book “A Philosophical Approach to Addressing Islam” (1983) and “The Role of Islamic Philosophy” (1985). ).

In his book “A Journey to Mecca”, Hofman deals with his first trip to Mecca after his conversion to Islam, touching on the pillars of Islam and the reality of faith as he feels, exposed to his mystical and philosophical reflections that were necessary throughout the pilgrimage.

Hofman criticizes Muslims, “psychologically defeated”, considering that Islam is a viable alternative to solving the world’s major problems in the postmodern era and the third millennium. Hofman has offered his criticism of Western modernity and stereotypes about Muslims and hostility between East and West from the site of the German Muslim thinker.