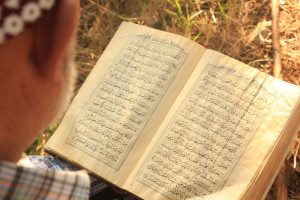 The Quran is His exact speech which is linguistically miraculous.

In the revelation of Islam, God Almighty has separated His guidance into two entities:

1- The Quran is His exact speech which is linguistically miraculous. No one other than Almighty God is responsible for one letter therein. And no one else is capable of reproducing such a work.

The words Hadith (saying/report) and Sunnah (tradition/life style) of Prophet Muhammad are similar because one is taken from the other.

Our scholars from the first century to the fourth gathered millions of hadiths and recorded and classified hundreds of thousands.

As you will see some hadiths are a reliable source of revelation and some are  fabrications of misguided people.

What is the Difference Between Hadith and Sunnah?

The Sunnah is a collection of all hadiths which are proven to be authentic.

The word Hadith refers to the recorded sayings, deeds, tacit approvals, as well as the exalted character and physical appearance of the Prophet Muhammad.

From His sayings which occurred and were recorded throughout His prophethood:

“Indeed, actions are but by their intentions and for every person is what he/she intended.” (Al-Bukhari)

From His deeds: This includes all the actions done by the Prophet which were witnessed, memorized, and recorded such as his performance of the prayer, pilgrimage, and so on.

From His tacit approval: This refers to the occasions when the Prophet approved some statement or action of his companions by remaining silent. For example, when his Companions ate a lizard in front of him.

Though he didn’t join them, the Prophet didn’t object to them eating it. Had it have been forbidden, he would have definitely clarified its prohibition.

Hadiths constitute the second source of revelation in Islam. This is made clear in several verses where God commands us “O you who believe! Obey God and Obey His Messenger”. (An-Nisaa’ 4:59)

Obeying God can only be in obeying the Quran which is His only preserved message to mankind.

The Quran never mentions “Obey God” without mentioning “and obey His Messenger” as a separate entity entitled to obedience.

The Prophet was sent to expound upon God’s message with the guidance of God. There are a few instances where the Prophet did something and God immediately sent a verse reprimanding him.

And whoever obeys the Prophet has indeed obeyed God. (An-Nisaa’ 4:80)

There has certainly been provided an excellent example to follow in the Messenger of God for anyone who hopes to be with God and succeed on the Day of Judgment and remembers God often. (Al-Ahzab 33:21)