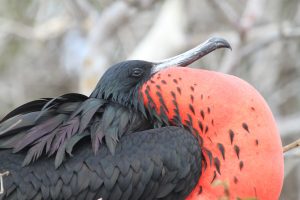 Darwin and the voyage of the Beagle

The basic idea of biological evolution is that populations and species of organisms change over time. Today, when we think of evolution, we are likely to link this idea with one specific person: the British naturalist Charles Darwin.

In the 1850s, Darwin wrote an influential and controversial book called On the Origin of Species. In it, he proposed that species evolve (or, as he put it, undergo “descent with modification”), and that all living things can trace their descent to a common ancestor.

Darwin also suggested a mechanism for evolution: natural selection, in which heritable traits that help organisms survive and reproduce become more common in a population over time.

In this article, we’ll take a closer look at Darwin’s ideas. We’ll trace how they emerged from his worldwide travels on the ship HMS Beagle, and we’ll also walk through an example of how evolution by natural selection can work.

Darwin and the voyage of the Beagle

Darwin’s seminal book, On the Origin of Species, set forth his ideas about evolution and natural selection. These ideas were largely based on direct observations from Darwin’s travels around the globe. From 1831 to 1836, he was part of a survey expedition carried out by the ship HMS Beagle, which included stops in South America, Australia, and the southern tip of Africa. At each of the expedition’s stops, Darwin had the opportunity to study and catalog the local plants and animals.

Darwin found that nearby islands in the Galápagos had similar but non-identical species of finches living on them. Moreover, he noted that each finch species was well-suited for its environment and role. For instance, species that ate large seeds tended to have large, tough beaks, while those that ate insects had thin, sharp beaks. Finally, he observed that the finches (and other animals) found on the Galápagos Islands were similar to species on the nearby mainland of Ecuador but different from those found elsewhere in the world.

Darwin didn’t figure all of this out on his trip. In fact, he didn’t even realize all the finches were related but distinct species until he showed his specimens to a skilled ornithologist (bird biologist) years later.

Gradually, however, he came up with an idea that could explain the pattern of related but different finches.

According to Darwin’s idea, this pattern would make sense if the Galápagos Islands had long ago been populated by birds from the neighbouring mainland. On each island, the finches might have gradually adapted to local conditions (over many generations and long periods of time). This process could have led to the formation of one or more distinct species on each island.

If this idea was correct, though, why was it correct? What mechanism could explain how each finch population had acquired adaptations or features that made it well-suited to its immediate environment? During his voyage, and in the years after, Darwin developed and refined a set of ideas that could explain the patterns he had observed during his voyage. In his book, On the Origin of Species, Darwin outlined his two key ideas: evolution and natural selection.