General And Crucial Facts Should Be Known about Jesus Christ

In the Islamic doctrine, there is no doubt that the Christ son of Mary (`Eisa son of Mariam), is a human being and a Messenger of Allah, so non-Muslims  especially Christians should recognize the following facts:

First, `Eisa is human born from mother without father; he is like our mother Eve who was created from Adam without mother.

Second, he is a Messenger of Allah like other Messengers of great hardihood.

Third, he called Bani Israel to worship only Allah who is `Eisa’s Lord and their Lord.

Fourth, he was neither killed nor crucified; but lifted up to heaven.

Fifth, he is still alive in heaven.

Sixth, he will descend, break the cross and kill the false Christ.

Seventh, he will rule on the earth for forty years with the Holy Quran as it is the Last word of Allah.

Eighth, he will die in this world and resurrect as other Prophets and human beings.

Ninth, on the Resurrection Day, Allah (Exalted be He) will directly inquire about the deity question of  the Christ (peace be upon him) and his mother Mariam in front of those who took him and his mother as gods with Allah (Exalted be He) so that they can hear the Christ when he will whitewash himself in fear and surprise from what they lied  on him in this World. Tenth, every human being is destined to die once only in this world and if `Eisa (peace be upon him) died, he would not come down by the end of time. Eleventh, Bani Israel differ in their belief in regard to the nature of Jesus (AS). 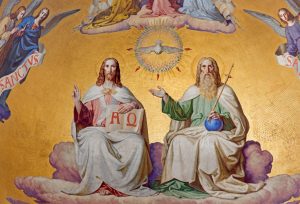 “They do blaspheme who say: Allah is one of three in a Trinity: for there is no god except One Allah.” (Qur’an, 5:72)

“Of the Jews there are those who displace words from their (right) places,…” Ultimately, the trinity doctor proved to be forged and untruthful.

(72) They do blaspheme who say: “Allah is Christ the son of Mary.” But said Christ: “O Children of Israel! worship Allah, my Lord and your Lord.” Whoever joins other gods with Allah,- Allah will forbid him the garden, and the Fire will be his abode. There will for the wrong-doers be no one to help.

(73) They do blaspheme who say: Allah is one of three in a Trinity: for there is no god except One Allah. If they desist not from their word (of blasphemy), verily a grievous penalty will befall the blasphemers among them.

(75) Christ the son of Mary was no more than a messenger; many were the messengers that passed away before him. His mother was a woman of truth. They had both to eat their (daily) food. See how Allah doth make His signs clear to them; yet see in what ways they are deluded away from the truth!

However, the corrupted Christian doctrine, trinity, continued to the time of Messenger Mohammed  peace and blessings of Allah be upon him who is sent to all Mankind and calls all nations to the doctrine of Monotheism (Tawhid).  The Holy Qur’an attacks the trinity doctrine and points out that it is false and that there is no god but Allah. Furthermore, the Holy Qur’an denies the deity of the Christ and assures that he is just a Messenger of Allah and His word (Exalted be He ) endowed to Mariam mother of Jesus. See (5: 116-117),

(116) And behold! Allah will say: “O Jesus the son of Mary! Didst thou say unto men, worship me and my mother as gods in derogation of Allah´?” He will say: “Glory to Thee! never could I say what I had no right (to say). Had I said such a thing, thou wouldst indeed have known it. Thou knowest what is in my heart, Thou I know not what is in Thine. For Thou knowest in full all that is hidden.

(117) “Never said I to them aught except what Thou didst command me to say, to wit, ´worship Allah, my Lord and your Lord´; and I was a witness over them whilst I dwelt amongst them; when Thou didst take me up Thou wast the Watcher over them, and Thou art a witness to all things.

To conclude, Allah (Exalted be He) calls those who led astray and worshipped Jesus to repent and return to Allah the Lord of the Christ and their Lord and worship Him alone (Exalted be He), otherwise they shall be thrown into Hellfire. See (5:74),

“Why turn they not to Allah, and seek His forgiveness? For Allah is Oft-forgiving, Most Merciful.”

Dr. Ahmad Muhammad Al khalidi is Researcher and translator, EL teacher and lecturer, an old member in the presentation to Islam committee.