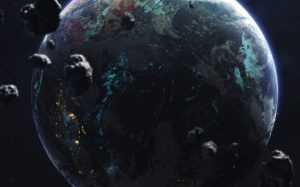 The descriptions of creation of the universe are interspersed with verses extolling God’s Power.

The descriptions of creation of the universe in the Quran are primarily messages from God, rather than factual or historical accounts.

They stimulate the readers or listeners into contemplating the order and magnificence of the universe and thinking about the Creator Who is behind it all.

“Verily, in the creation of the heavens and the earth and in the alternation of night and day are signs for people who exercise their intellect.” (Aal `Imran 3:190)

The descriptions of creation of the universe are interspersed with verses extolling God’s Power, reproaching humankind’s ingratitude, and prompting humans to inquisitively ponder over their own creation and this entire universe.

The Universe had a beginning

The Quran clearly states that the universe had a beginning, and that God caused that beginning; all that God needs to create anything is to say to it, “Be.”

Describing the creation of the heavens and the earth, the Quran states that the universe started as one entity, which was then unstitched or as science explains it – a single, infinitely dense point, which then exploded outwards (the Big Bang).

“Have not the disbelievers seen that the heavens and the earth were Ratqan (joined together as one unit, a mass all sewn up), and then We Fataqnahuma (unstitched them, clove them asunder) and made from water every living thing?” (Al-Anbiyaa’ 21:30)

Rataqa in Arabic means assembling and joining the pieces of fabric together, which is the opposite of Fataqa (unstitching): separating between two joined or sealed parts at the point of attachment.

These two words are used to describe fabric. When a textile fabric is unstitched and its threads are unraveled, it is said, “Fataqa Al-Thawb (the stitching of the dress has come undone).”

The Heavens and the Earth Were Ratqan

Accordingly, God’s Saying: “…the heavens and the earth were Ratqan…” means they were one whole, interwoven, connected, and inseparable, without space between them, then “…We (God) Fataqnahuma (unstitched them; clove them asunder).” Furthermore, the verb “Fataqa” refers to gentle separation at a weak point.

Explosion is about chaos and destruction rather than creation. From the viewpoint of the Quran, everything, including ‘the heavens and earth,’ was interwoven and inseparable.

Fataqa literally translates as ‘unstitching,’ which typically has to be done carefully.

Here, it signifies an accurate and planned process, rather than a random one, which is consistent with the intelligently designed and organized universe that followed.

When a tailor undoes the stitches on a piece of fabric, he does so with the utmost care, whereas an explosion disperses the matter in all directions without order or a system.

The Quran mentions that the universe, at one point in its origin, was a gaseous mass, from which began the formation of the heavens and the earth.

“Then He (God) turned to the heaven when it was smoke, and said to it and to the earth, ‘Come (into being) willingly or unwillingly!’ They said, ‘We come willingly.’” (Fussilat 41:11)

Smoke obviously corresponds to the nebular hypothesis put forward by modern science. It proposes that the sun, the earth, and the rest of the solar system formed from a nebula, or a cloud of gas and dust.

The Quran also establishes that the universe is not static but is constantly expanding and dynamic.

“With power did We (God) construct the heaven, and verily, We are steadily expanding it.” (Adh-Dhariyat 51:47)

This means that, since the universe expands, at some specific time in the past the entire universe must have begun this expansion from a single point.

In other words, the universe had to have a zero beginning, which implies a Beginner.

In the 1920s, astronomer Edwin Hubble studied the movement of galaxies and observed that they were continually moving away from each other at an accelerating rate, directly proportional to the distance of the galaxy from the earth.

His observation led to the most important astronomical discovery of the 20th century: the universe is expanding. It also provided for the foundation of the Big Bang theory, which requires the creation of the universe from nothing.

(Since the parts of the universe are continually moving apart from each other, they must have been a single mass at one point in the past. By going back in time and reversing the process of cosmic expansion, all particles would converge until they shrink back to a point).

The Quran is a book of guidance and signs, not science. This guidance comes in different ways; knowledge about the universe and humankind is one of them, which will continue to unfold, over time, by God’s Will. “We (God) will show them Our Signs in the universe and in their own selves, until it becomes manifest to them that this (the Qur’an) is the truth.” (Fussilat 41:53)

The Quran launches the call to “walk in the earth” to know how the creation started, in the verse stating: “Say (O Muhammad), ‘Travel throughout the land and see how He originated the creation…’” (Al-`Ankabut 29:20)

God’s Statement in the previously mentioned verse clearly indicates that the secrets of the beginning of creation are stored inside the earth – in the rocks, fossils, meteorites, and the deep sea.

These secrets and signs that point to the beginning of creation can only be known by walking in the earth and exploring nature.

Source: The article is based on the author’s book, God Or No God: Islamic Viewpoint vs. Atheist Viewpoint