The Bible is filled with the miracles of Jesus Christ, from healing to the sick, exorcising evil spirits and many other miracles of all kinds. For example:

“And when Jesus was passed over again by ship unto the other side, much people gathered unto him: and he was nigh unto the sea And, behold, there cometh one of the rulers of the synagogue, Jairus by name; and when he saw him, he fell at his feet, And besought him greatly, saying, My little daughter lieth at the point of death: I pray thee, come and lay thy hands on her, that she may be healed; and she shall live. And Jesus went with him; and much people followed him, and thronged him. And a certain woman, which had an issue of blood twelve years, And had suffered many things of many physicians, and had spent all that she had, and was nothing bettered, but rather grew worse, When she had heard of Jesus, came in the press behind, and touched his garment. For she said, If I may touch but his clothes, I shall be whole. And straightway the fountain of her blood was dried up; and she felt in her body that she was healed of that plague..”(Mark 5: 29:21)

Christian position on the miracles of Jesus

The Holy Qur’an approves some of those miracles with some restrictions and kept silence at others.

(…And a messenger to the children of Israel that I have I come to a verse from your Lord, I Create your mud as a body bird Vonfaj in it shall be a bird, God willing, and will heal the blind and the leper, and I salute the dead, God willing, and I inform you what you eat and what Tdechron in your houses that That is a sign for you, if you are believers.) (49: 3) 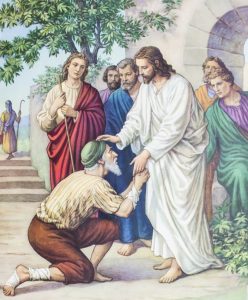 However, one feel the Christian exaggeration of Jesus’ miracles for taking them s as proof of the divinity of Jesus peace be upon him.

Perhaps the Christian equivocal ecclesiastical understanding of miracles was the result of the fluctuation of the concept of the miracle in Christian teachings.

Definition of a miracle

In his book Al-Tarifat, Al-Sharif Al-Jurjani, a Muslim ethologist, defines the miracle as: “An extraordinary thing, calling for good and happiness, coupled with the claim of prophecy, intended to show the sincerity of the one who claimed to be a messenger of God.” It appears from this definition that the miracle is driven by God at the hands of the prophet in order to believe in his message and not to demonstrate their divinity, otherwise this miracle will become a lie to the Lord or a proof of polytheism or the existence of partner to God. Therefore, he  mentioned the phrase “associated with the claim of prophecy” and not the claim of divinity.

Qur’an, while stating such miracles of Jesus, decides that he, peace peace be upon, did them only by the permission of his God Allah and to prove the divinity and oneness of his Lord. Allah (Almighty) says,

We find a similar confession in the Gospels by the words of Jesus himself, he says:

“By myself I can do nothing; I judge only as I hear, and my judgment is just, for I seek not to please myself but him who sent me.” (John 5: 30)

Jesus also confess his weakness and being in need of help from his Lord saying: “(Then they took away the stone from the place where the dead man was lying. And Jesus lifted up His eyes and said,

“Father, I thank You that You have heard Me. And I know that You always hear Me, but because of the people who are standing by I said this, that they may believe that You sent Me.”) (John, 11: 41-42)

(And [beware the Day] when Allah will say, “O Jesus, Son of Mary, did you say to the people, ‘Take me and my mother as deities besides Allah?’” He will say, “Exalted are You! It was not for me to say that to which I have no right. If I had said it, You would have known it. You know what is within myself, and I do not know what is within Yourself. Indeed, it is You who is Knower of the unseen”.(5:116).

Jesus’ Miracles are not Unique

Jesus’ Miracles are not Unique because there were many miracles that were brought by other Prophets and were even greater. Prophet Muhammad (peace and blessings of Allah be upon him) came with miracles such as the miracles of Jesus (peace be upon him) of healing the patient. A soldier was injured in his eye which was poked out and fell down on the ground, Prophet Muhammad returned it to its place and healed it. Another miracle occurred to him is the flowing of water from his fingers on the Day of Hudayibia and more than one thousand people drank and washed themselves by it!.

There were prophets who were supported with miracles which surpassed that of Jesus peace be upon him as much. For instance Moses, peace be upon him, turned his stick into a great snake and the broke down the sea with it. Prophet eyes, Solomon peace be upon him, which had control over the jinn and made a great kingdom of different creatures reached. however, none of claimed their divinity or called them gods due to their miracles!