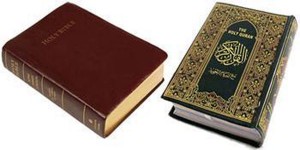 Whereas, The Bible is a collection of writings by many different authors, the Qur’an is a dictation (or recitation).

Now I can come back to the claim the Qur’an makes that it has internal evidence of its origin. There are many ways that you can look at this. As one example, if I single out somebody here and say: You know, I know your father – he is going to doubt that, he has never seen me with his father. He would say, how does he look like, is he tall short does he wear glasses? and so on, and if I give him the right answers pretty soon he will get convinced, “Oh yes, you did meet him”. If you apply the same kind of thinking when you look at the Qur’an, here is a book that says it came from the one who was there when the universe began. So you should be asking that one: So tell me something that proves it. Tell me something that shows me you must have been there when the universe was beginning. You will find in two different Ayahs the statement that all the creation began from a single point, and from this point it is expanding. In 1978 they gave the Noble prize to two people who proved that is the case. It is the big bang origin of the universe. It was determined by the large radio receivers that they have for the telephone companies which were sensitive enough to pick up the transmissions from satellites and it kept finding background noise that they could not account for. Until the only explanation came to be, it is the left over energy from that original explosion which fits in exactly as would be predicted by the mathematical calculation of what would be this thing if the universe began from a single point and exploded outwards. So they confirmed that, but in 1978. Centuries before that here is the Qur’an saying the heavens and the earth in the beginning they were one piece and split and says in another Ayah: “of the heavens we are expanding it”.

Let me tell you about a personal investigation, it occurred to me that there are a number of things you can find in the Qur’an that give evidence to its origin – internal evidence. If the Qur’an is dictated from a perfect individual; it originates with God, then there should not be any wasted space, it should be very meaningful. There should be nothing that we do not need that you can cut off, and it should not be missing anything. And so that everything in there should really be there for a specific purpose. And I got to thinking about the Ayah which I mentioned before, it says, the likeness of Jesus is the likeness of Adam. It an equation, it uses the Arabic word (mithel), it says Jesus, Adam, equal. You go to the index of the Qur’an, you look up the name ISA. it is in the Qur’an 25 times, you look up the name Adam it is there 25 times. They are equal, through scattered references but 25 of each. Follow that through and you will find that in the Qur’an there are 8 places were an Ayah says something is like something else, using this (Mithel), you will find in every case and take both sides of it whatever that word is look it up in the index and it will be let’s say 110 times and lookup the other word and it will be said to be equal to the same 110. That is quite a project of co-ordination if you try to write a book that way yourself. So that everywhere you happened to mention that such and such is like such and such that then you check your index, filing system, or your IBM punch cards or whatever, to make sure that in this whole book you mentioned them both the same number of times. But that’s what you will find in the Qur’an.

What I am talking about is built on a thing that is called in Logic: Use and Mention of a Word. When you use a word, you are using its meaning. When you mention a word, you are talking about the symbol without the meaning. For example, if I say Toronto is a big city – I used the word Toronto as I meant this place Toronto is a big city. But if I say to you Toronto has 7 letters, I am not talking about this place Toronto, I am talking about this word – Toronto. So, the revelation is above reasoning, but it is not above reason. That is to say we are more apt not to find in the Qur’an something that is unreasonable, but we may find something that we would have never figured out for ourselves.

Unique Word Refers to Itself in Qur’an

The author of this sentence said if this book came from someone besides God then you will find in it many Ikhtalafan (inconsistencies). The word Ikhtilaf is found many times in the Qur’an. But the word Ikhtalafan is only found once in the Qur’an. So there are not many Ikhtilafan in the Qur’an, there is only one – where the sentence is mentioned. So you see how things are put together perfectly. It has been suggested to mankind: Find a mistake. Man could not get hold of a mistake, and he is very clever, because this sentence could also mean: Find many Iktilafan and so he quickly goes to the index to see if he can find many of them and there is only one… Sorry clever person.

Comparison between Bible and Torah, Injeel and Zabur