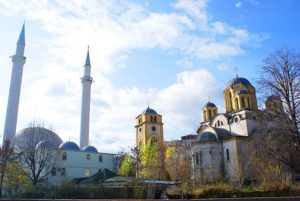 Peaceful coexistence between Muslims and non-Muslims inside the Muslim world

Indeed, the final message of Islam was sent down to the inhabitants of the earth in such an era which recognized neither justice nor kindness nor the contemporary concepts of freedom, pluralism or peaceful coexistence.

As a matter of fact, such an age was characterized by extremism, fanaticism and persecution. Only one religion, even one doctrine, was allowed in a given locality. A country could hardly accommodate more than one faith. Minorities had no rights so that they could have the freedom of religion. They had rather to adapt to the very likely tyranny, coercion, and compulsion.

However, Muslims’ relations with non-Muslims have been based on justice and kindness though the world adopted those values only numerous centuries later. In the Qur’an, we read:

Indeed, Allah orders justice and kindness and giving to relatives and forbids immorality and bad conduct and oppression. He admonishes you that perhaps you will be reminded. (An-Nahl 16:90)

Verily! Allah commands that you should render back the trusts to those, to whom they are due; and that when you judge between men, you judge with justice. Verily, how excellent is the teaching which He (Allah) gives you! Truly, Allah is Ever All-Hearer, All-Seer. (An-Nisaa’ 4:58)

… And remain on a right course as you are commanded and do not follow their inclinations but say, “I have believed in what Allah has revealed of the Qur’an, and I have been commanded to do justice among you. Allah is our Lord and your Lord. For us are our deeds, and for you your deeds. There is no [need for] argument between us and you. Allah will bring us together, and to Him is the [final] destination.” (Ash-Shura 42:15)

Prophet Muhammad was also commanded to be just when judging among non-Muslims. We read:

O you who have believed, be persistently standing firm for Allah , witnesses in justice, and do not let the hatred of a people prevent you from being just. Be just; that is nearer to righteousness. And fear Allah; indeed, Allah is Acquainted with what you do. (Al-Ma’idah 5:8)

The command to Muslims is not restricted to justice and fairness but also righteousness and kindness. We read:

Perhaps Allah will put, between you and those to whom you have been enemies among them, affection. And Allah is competent, and Allah is Forgiving and Merciful. Allah does not forbid you from those who do not fight you because of religion and do not expel you from your homes – from being righteous toward them and acting justly toward them. Indeed, Allah loves those who act justly. Allah only forbids you from those who fight you because of religion and expel you from your homes and aid in your expulsion – [forbids] that you make allies of them. And whoever makes allies of them, then it is those who are the wrongdoers. (Al-Mumtahanah 60:7-8)

Coexistence between Muslims and Non-Muslims inside the Muslim World

There are several forms of justice and kindness towards non-Muslims inside the Muslim world. One of those forms is giving them security for themselves. Therefore, Prophet Muhammad prohibited killing a Mu`ahad (a person who is granted the pledge of protection by the Muslims)

`Abdullah ibn` Amr reported that the Prophet said: “Whoever kills a Mu`ahad shall not smell the fragrance of Paradise though its fragrance can be smelt at a distance of forty years (of traveling).” (Al-Bukhari)

Another form of justice and kindness towards non-Muslims is defending and protecting them and showing them clemency. Amr ibn Maymoun reported that `Umar (after he was stabbed), instructed (his would-be-successor) saying, “I urge him (i.e. the new Caliph) to take care of those non-Muslims who are under the protection of Allah and His Messenger in that he should observe the convention agreed upon with them, and fight on their behalf (to secure their safety) and he should not over-tax them beyond their capability.” (Al-Bukhari)

The forms of justice and kindness towards non-Muslims include preserving their human dignity. Qais ibn Sa’d reported: A funeral passed by the Messenger of Allah, peace and blessings be upon him, and he stood up. It was said to him, “It is a Jew.” The Prophet said, “Was he not a soul?” (Al-Bukhari)

Another form of justice and kindness towards non-Muslims is giving them the freedom of religion and refraining from compelling them into Islam. About this the Qur’an says:

There shall be no compulsion in [acceptance of] the religion. The right course has become clear from the wrong… (Al-Baqarah 2:256)

As a form of justice and kindness towards non-Muslims, Muslims are commanded to respect the other religions and faiths so that non-Muslims will be more likely to respect Islam and Muslims. Indeed, Islam prohibits cursing non-Muslims or even the false gods they worship. In the Qur’an, we read:

And do not insult those they invoke other than Allah, lest they insult Allah in enmity without knowledge. (Al-An`am 6:108)

Moreover, politeness and courtesy in dialogue in matters of religion also constitute a form of justice and kindness towards non-Muslims. About this the Qur’an says:

And do not argue with the People of the Scripture except in a way that is best, except for those who commit injustice among them, and say, “We believe in that which has been revealed to us and revealed to you. And our God and your God is one; and we are Muslims [in submission] to Him.” (Al-`Ankabut 29:46)

Mixing and socializing with non-Muslims, especially Jews and Christians, may also serve as a form of justice and kindness. Muslims are permitted to eat from the foods of non-Muslims and let non-Muslims eat from their foods. Also, Muslim men are allowed to marry decent women from the People of Scripture. In the Qur’an, we read:

This day [all] good foods have been made lawful, and the food of those who were given the Scripture is lawful for you and your food is lawful for them. And [lawful in marriage are] chaste women from among the believers and chaste women from among those who were given the Scripture before you, when you have given them their due compensation, desiring chastity, not unlawful sexual intercourse or taking [secret] lovers. (Al-Ma’idah 5:5)

Another form of justice and kindness towards non-Muslims is offering non-Muslims refuge if they seek refuge in Muslims. In the Qur’an, we read:

And if anyone of the polytheists seeks your protection, then grant him protection so that he may hear the Word of Allah (the Qur’an), and then escort him to where he can be secure, that is because they are men who know not. (At-Tawbah 9:6)

Coexistence outside the Muslim World