Zina (adultery) is definitely an ugly thing. I will shed light on its ugliness on a live example of the France’s Muslim justice minister who, alas, has been promoted as the role model for “emancipated” woman in the West.

The single female minister gave birth to a baby and took one of the nine lovers she had before the conception to court to make him accept paternity, and whom was ordered to give her a monthly allowance of 2,500 euros ($2,700). 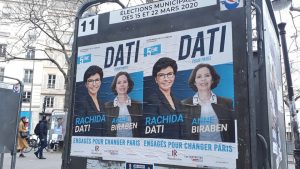 Rachida Dati in an election campaign

Away from her personal life, we need to look at how she is, wrongly, portrayed in media as an exemplar. She was an ordinary woman who aimed to have a family and lead a modest life.

However, Western media has been badly influencing her character to be depicted as a powerful role model although she went away from chastity. she got divorced to lead such an unchaste life. Through illegal sexual affairs, she won her position in Nicolas Sarkozy’s presidential campaign before being appointed as the Minister of Justice in his cabinet.  The media analyzed her character and personality then as “an opportunist who is able to offer anything – even being Sarkozy’s mistress- to get whatever she wants.”

It is quite strange that she is the one who stood up in court and consented to her multiple sexual affairs that she didn’t know who indeed was the father of her child! Ironically, she was severely censured in the same media that had applauded her before as  the “astonishing inspiring Muslim woman”!

Chastity in the Qur’an

The Qur’an talks clearly and decisively about the topic of chastity and stresses its importance :

“And [they are] those who, when they spend, do so not excessively or sparingly but are ever, between that, [justly] moderate. And those who do not invoke with Allah another deity or kill the soul which Allah has forbidden [to be killed], except by right, and do not commit unlawful sexual intercourse. And whoever should do that will meet a penalty. Multiplied for him is the punishment on the Day of Resurrection, and he will abide therein humiliated – Except for those who repent, believe and do righteous work. For them Allah will change their sins into good deeds. And ever is Allah Forgiving and Merciful. And he who repents and does righteousness does indeed turn to Allah with true repentance. (Al-Furqan :67-71)

And whoever associates others with Allah, kills ,commits adultery will suffer eternal humiliation and disgrace, except for those who:

they will not only be forgiven, but also:

“Allah will change their sins into good deeds. (Al-Furqan :70)

It’s only those who turn to Allah with “true repentance.” (Al-Furqan :71)

The woman who live in chastity and dignity cannot be held equal to the one who live in debauchery and wantonness!

There are plenty of more worse examples where women bodies are used as for marketing commodities on papers    or media, which no human, whatever his religion, can tolerate it. It’s against all religions; Islam, Christianity, or Judaism.  It is even against nature!