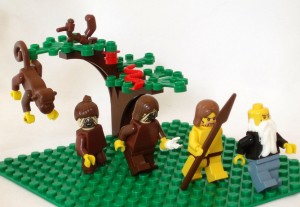 All of these reasons are sufficient evidence for Muslim evolutionists to consider evolution as nothing more than a theory designed to deny God.

Chance Conflicts with the Truth of Creation

Those who maintain that there is no contradiction between evolution and creation ignore one important point: Such people believe that Darwinism’s main claim is that living species emerged by evolving from each other.

However, this is not the case, for evolutionists claim that life emerged as the result of chance, by unconscious mechanisms. In other words, life on Earth came about without a Creator and by itself from inanimate substances.

Such a claim rejects the existence of a Creator right from the start, and thus cannot be accepted by any Muslim. However, some Muslims who are unaware of this truth see no harm in supporting evolution on the assumption that God could have used evolution to create living things.

Yet they ignore one important danger: Although they are trying to show that evolution is parallel to religion, in reality, they are supporting and actually agreeing with an idea that is quite impossible from their own point of view. Meanwhile, evolutionists turn a blind eye to this situation because it furthers their cause of having society accept their ideas.

Looking at the matter as a devout Muslim and thinking about it in the light of the Qur’an, a theory that is fundamentally based upon chance clearly cannot have anything in common with Islam. Evolution sees chance, time, and inanimate matter as divine, and ascribes the title of “creator” to these weak and unconscious concepts. No Muslim can accept such a pagan-based theory, for each Muslim knows that Allah, the sole Creator, created everything from nothing. Therefore, he uses science and reason to oppose all beliefs and ideas that conflict with that fact.

Evolution is a component of materialism and, according to materialism, the universe has no beginning or end, and thus no need for a Creator. This irreligious ideology suggests that the universe, galaxies, stars, planets, sun, and other heavenly bodies, as well as their flawless systems and perfect equilibrium, are the results of chance. In the same way, evolution claims that the first protein and the first cell (the building blocks of life) developed by themselves as the result of a string of blind coincidences.

This same ideology claims that the wonders of design in all living things, whether they live on land, in the sea, or in the skies, are the product of chance. Although surrounded on all sides by evidence of creation, starting with the design in their own bodies, evolutionists insist upon ascribing all of that perfection to chance and unconscious processes.

In other words, their main characteristic is to see chance as divine in order to deny God’s existence. However, such a refusal to accept or to see God’s evident existence and greatness changes nothing. God’s infinite knowledge and matchless art reveal themselves in everything He creates.

As a matter of fact, recent scientific advances definitively reject the evolutionists’ baseless claims that life emerged by itself and by natural processes. The superior design in life shows that a Creator Who has superior wisdom and knowledge created all living things.

The fact that even the simplest organisms are irreducibly complex places all evolutionists in an impossible quandary – a fact that they themselves often admit! For example, the world-famous British mathematician and astronomer Fred Hoyle admits that life could not have come about by chance:

Once we see, however, that the probability of life originating at random is so utterly minuscule as to make it absurd…

The evolutionist Pierre-Paul Grassé confesses that ascribing a creative force to chance is pure fantasy:

Yet the Darwinian theory is even more demanding: A single plant, a single animal would require thousands and thousands of lucky, appropriate events. Thus, miracles would become the rule: events with an infinitesimal probability could not fail to occur… There is no law against daydreaming, but science must not indulge in it.

Those words make the evolutionists’ ideological dilemma perfectly clear: Even though they see that their theory is untenable and unscientific, they refuse to abandon it because of their ideological obsession. In another statement, Hoyle reveals why evolutionists believe in chance:

Indeed, such a theory (that life was assembled by an intelligence) is so obvious that one wonders why it is not widely accepted as being self-evident. The reasons are psychological rather than scientific.

What Hoyle describes as a “psychological” reason has conditioned evolutionists to deny creation. All of these reasons are sufficient evidence for Muslim evolutionists to consider evolution as nothing more than a theory designed to deny God.