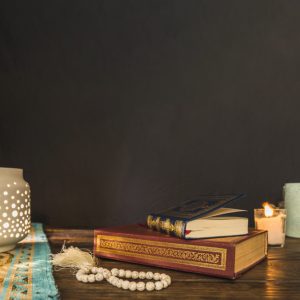 The Messenger of Allah enjoined Zakat al-Fitr as a purification for the fasting person from idle talk and obscenities, and to feed the poor.

This charity is called Fitrah, Zakat Al-Fiṭr or Sadaqat al-Fitr, which means: the charity for breaking the fast, since it is paid when Ramadan ends and fasting is over.

The obligation to pay the Fitrah begins at dawn on the day of Eid al-Fitr [which is the day after Ramadan], so whoever possesses the minimum amount of wealth at that time must pay. If someone delays payment, the obligation remains and must still be fulfilled, even though it is considered late.

They also explained that since Zakah can be paid early, so can Zakat al-Fitr. Other scholars quoted the report that Ibn ʿUmar said, “They [the Muslims during the Prophet’s time] used to give al-Fitr one or two days before [Eid]” (Al-Bukhari)

However, this report is not a clear prohibition that paying it earlier would not be allowed. Especially in circumstances where it can be difficult to get the money to the most deserving people, it is even recommended to pay it as early as possible, as long as it is in Ramadan.

Based on this understanding,

There is nothing wrong with paying zakat al-Fitr in the beginning of Ramadan to help Coronavirus-afflicted families.