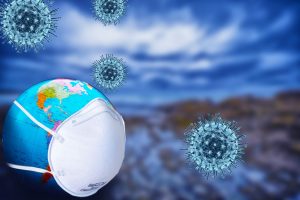 Is it allowed to join between prayers due to the Coronavirus (COVID-19) pandemic?

Answering your question about joining between prayers due to Coronavirus pandemic, the AMJA Resident Fatwa Committee, states:

Muslim scholars have different views regarding combining prayers. Some legal schools are more restricting in this regard, such as the Hanafis, and others are more flexible, such as the Hanbalis. The majority of scholars, namely the Malikis, Shafi`is, and Hanbalis, agreed that it is permissible to join prayers due to an excuse, while differing over which type of an excuse.

A group of scholars mentioned fear as a legitimate excuse to join prayers. This is the position of the Malikis, Hanbalis, and some Shafi`is. They used as proof that which was narrated in Sahih Muslim from Sa`id ibn Jubayr from Ibn Abbas, who said: The Messenger of Allah (peace be upon him) observed the noon and afternoon prayers together in Medina without being in a state of fear or in a state of journey. Abu al-Zubair said: I asked Sa`id why he did that. He said: I asked Ibn Abbas as you have asked me, and he replied that he [the Prophet] wanted that no one among his Ummah should be put to [unnecessary] hardship.

This indicates that during their time fear was a legitimate excuse to join prayers, or else Ibn Abbas (may Allah be pleased with him) would not have mentioned it. Similarly, this hadith clarifies the reason that allows for joining prayers: lifting hardship due to a need, as was mentioned by Ibn Abbas.

From those who allowed joining prayers due to a need were Ibn Sireen and Ibn al-Mundhir, as long as this is not taken as a habit. This was also chosen by Shaykh al-Islam Ibn Taymiyyah from the Hanbalis.  He said: “and the most flexible of the madhhabs with regard to combining prayers is the madhhab of Imam Ahmad, for he stated that it is allowed to combine due to hardship and work…” (Majmu’ al-Fatawa, 24/30)

Based on this, if joining prayers is a means to limiting the spread of coronavirus (COVID-19) amongst people, as well as a means for people to get the reward for congregational prayer since in some countries there are restrictions from going out at night or limitations to the number of congregants, then there is no problem in combining prayers in the mosque.

If there is no apparent need and preponderant benefit to join, they can pray at home on time and they will be excused from attending the congregation. Prayers are not to be joined except in the mosque.