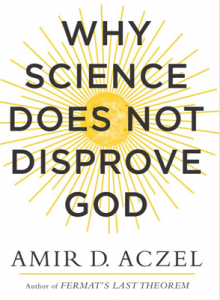 Aczel discusses the mysteries of “emergent” phenomena — when a complex system exhibits a qualitative behavior that cannot be explained in terms of the workings of its individual parts.

“Why Science Does Not Disprove God”

In “Einstein, God, and the Big Bang,” a colorful chapter of his new book, Amir D. Aczel maintains that Albert Einstein truly believed in God. He points out that Einstein attended synagogue during his year in Prague (1913).

He repeats several famous Einstein utterances mentioning the Deity: “Subtle is the Lord, but malicious he is not” and “I want to know God’s thoughts — the rest are details.” And he quotes from a letter the great physicist wrote to a little girl in January 1936:

“Everyone who is seriously interested in the pursuit of science becomes convinced that some spirit is manifest in the laws of the universe, one that is vastly superior to that of man.”

Aczel goes on to express strong displeasure with such people as physicist Lawrence Krauss and evolutionary biologist Richard Dawkins (who, in his bestseller “The God Delusion,” says that Einstein “didn’t really mean it”) when they cast Einstein as an atheist in support of their diatribes against religious belief.

Aczel, trained as a mathematician, currently a research fellow in the history of science at Boston University and the author of “Fermat’s Last Theorem,” takes aim at the New Atheists in his intelligent and stimulating book “Why Science Does Not Disprove God.” He attempts to show that the New Atheists’ analyses fall far short of disproving the existence of God. In fact, he accuses these folks of staining the scientific enterprise by bending it to their dark mission.

(“The purpose of this book is to defend the integrity of science,” he writes in his introduction.) Yet Aczel has a sly mission of his own. Invoking various physical phenomena that do not (yet) have convincing scientific explanations, he sets out not only to debunk the arguments of the New Atheists but also to gently suggest that the findings of science actually point to the existence of God.

In stockpiling his arguments, Aczel quotes from his interviews with dozens of leading scientists and theologians, and interprets statements in a range of popular writings. The resulting book is part science (interesting but superficial summaries of cosmology, quantum mechanics, evolutionary biology, chaos theory), part history of religion, part philosophy, part spirituality, and a modicum of backbiting and invective. The latter applies to the writings of the New Atheists as well.

Let’s start with the origin of the universe. There is plenty of good scientific evidence that our universe began about 14 billion years ago, in a Big Bang of enormously high density and temperature, long before planets, stars and even atoms existed. But what came before? Krauss in his book discusses the current thinking of physicists that our entire universe could have emerged from a jitter in the amorphous haze of the subatomic world called the quantum foam, in which energy and matter can materialize out of nothing.

(On the level of single subatomic particles, physicists have verified in the lab that such creation from “nothing” can occur.) Krauss’s punch line is that we do not need God to create the universe. The quantum foam can do it quite nicely all on its own. Aczel asks the obvious question: But where did the quantum foam come from? Where did the quantum laws come from? Hasn’t Krauss simply passed the buck? Legitimate questions. But ones we will probably never be able to answer.

In his foray into biology, Aczel says the theory of evolution is flawed. In particular, he points out that it does not explain altruistic behavior with no apparent survival benefit to the genes of the do-gooder. He cites a recent example of a Mount Everest climbing expedition in which an Israeli climber was well on his way to the top when he discovered a fallen Turkish climber who had lost his face mask and oxygen supply. At the cost of his own fingers and toes to frostbite, and sacrificing the glory of reaching the summit, the Israeli stopped and saved the life of the Turkish fellow. Why did he do it? “Human decency and goodness,” Aczel writes, with the implication that such qualities come from religion and spirituality. (In another chapter, he explains how a code of morality developed in early religions.)

Aczel discusses the mysteries of “emergent” phenomena — when a complex system exhibits a qualitative behavior that cannot be explained in terms of the workings of its individual parts: for example, the emergence of self-replicating life from inanimate molecules or the emergence of consciousness from a collection of connected neurons. He writes, “The inexplicability of such emergent phenomena is the reason why we cannot disprove the idea of some creative power behind everything.”

I disagree. It is not the inability of science to explain some physical phenomenon that shows we cannot disprove the existence of a creative power (i.e., God). Science is a work in progress, and phenomena that science cannot explain now may be explained 100 years from now. Before the 18th century, people had no explanation for lightning. The reason that science cannot disprove the existence of God, in my opinion, is that God, as understood by all human religions, exists outside time and space. God is not part of our physical universe (although God may choose to enter the physical universe at times). God is not subject to experimental tests. Either you believe or you don’t believe.

There is one scientific conundrum that practically screams out the limitations of both science and religion. And that is the “fine tuning” problem. For the past 50 years or so, physicists have become more and more aware that various fundamental parameters of our universe appear to be fine-tuned to allow the emergence of life — not only life as we know it but life of any kind. For example, if the nuclear force were slightly stronger than it is, then all of the hydrogen atoms in the infant universe would have fused with other hydrogen atoms to make helium, and there would be no hydrogen left. No hydrogen means no water. On the other hand, if the nuclear force were substantially weaker than it is, then the complex atoms needed for biology could not hold together.

In another, even more striking example, if the cosmic “dark energy” discovered 15 years ago were a little denser than it actually is, our universe would have expanded so rapidly that matter could never have pulled itself together to form stars. And if the dark energy were a little smaller, the universe would have collapsed long before stars had time to form. Atoms are made in stars. Without stars there would be no atoms and no life.

So, the question is: Why? Why do these parameters lie in the narrow range that allows life? There are three possibilities: First, there might be some as-yet-unknown physics that requires these parameters to be what they are. But this explanation is highly questionable — why should the laws of physics care about the emergence of life? Second possibility: God created the universe, God wanted life (for whatever reasons), so God designed the universe so that it would allow life. Third possibility, and the one favored by many physicists today: Our universe is one of zillions of different universes with a huge range of parameters, including many different values for the strength of the nuclear force and the density of dark energy.

Some universes have stars and planets, some do not. Some harbor life, some do not. In this scenario, our universe is simply an accident. If our particular universe did not have the right parameters to allow the emergence of life, we wouldn’t be here to talk about it. In a similar way, Earth happens to be at the right distance from the sun to have liquid water, a nice oxygen atmosphere and so on. We can ask why our planet has all these lovely properties, amenable to life. And the explanation is that there is nothing special or designed about Earth. Other planets exist. But if we lived on Mercury, where the temperature is 800 degrees, or on Neptune, where it is 328 degrees below zero, we could not exist. Unfortunately, it is almost certain that we cannot prove the existence of these other universes. We must accept their existence as a matter of faith.

And here we come to the fascinating irony of the fine-tuning problem. Both the theological explanation and the scientific explanation require faith. To be sure, there are huge differences between science and religion. Religion knows about the transcendent experience. Science knows about the structure of DNA and the orbits of planets. Religion gathers its knowledge largely by personal testament. Science gathers its knowledge by repeated experiments and mathematical calculations, and has been enormously successful in explaining much of the physical universe. But, in the manner I have described, faith enters into both enterprises.

Several years ago, I thought that the writings and arguments of such people as Dawkins and Aczel, attempting to disprove or prove the existence of God, were a terrible waste of calories. I have changed my mind. I now believe that the discussions of science and religion, even the attempts of one side to disprove the other, are part of the continuing and restorative conversation of humanity with itself. In the end, all of our art, our science and our theological beliefs are an attempt to make sense of this fabulous and fleeting existence we find ourselves in.

Alan Lightman is a physicist, novelist and professor of the practice of the humanities at MIT. His latest book is “The Accidental Universe.”