Bedouins and Their Debased Culture before Islam 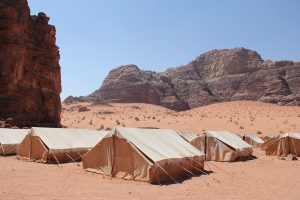 With no subtlety of mind, courtesy, respect or love for others, these people acted in a way quite remote from the standard of morality found in the Qur’an

In the days of the Prophet Muhammad (Peace and blessings be upon him), as in every period of history, there were those whose crude and shallow minds could not understand the subtleties of religious morality. Faith had not settled into their hearts. Some who adopted this religion of superficiality were the Bedouins:

“The desert Arabs are more obdurate in disbelief and hypocrisy and more likely not to know the limits which Allah has sent down to His Messenger…” (At-Tawbah: 97)

It is revealed in the Qur’an that the Bedouins were more given to disobedience and ignoring boundaries. Even though they personally met a blessed individual like the Prophet (Peace and blessings be upon him), engaged him in conversation and heard his message, and even though they witnessed his special moral character and noble and modern demeanor, most Bedouins remained backward, crude and shallow. This could be seen in their inability to properly appreciate Allah’s glory, their wrong attitudes toward religion and obedience, the way they sat and stood and how they ate—and their lack of respect toward the Prophet (Peace and blessings be upon him).

“You who believe! Do not go into the Prophet’s rooms except when you are invited to come and eat. Do not wait there while the food is being cooked. However, when you are called, go in, and when you have eaten, disperse, not remaining there to chat with one another. Doing that causes annoyance to the Prophet though he is too reticent to tell you so. But Allah is not reticent with the truth…” (Al-Ahzab: 53)

As said earlier, these people could not ponder subtle matters. For example, some called out to the Prophet (Peace and blessings be upon him) from outside his private quarters. They interrupted him and raised their voices during conversations with him. In the Qur’an, Allah warned them about this behavior:

“As for those who call out to you from outside your private quarters, most of them do not use their intellect. If they had only been patient until you came out to them, it would have been better for them.” (Al-Hujurat: 4-5)

Because their crude minds could not appreciate his superior moral character, high sense of conscience, patience and tolerance, they knew nothing of etiquette or respect. And they were not aware of what a great blessing it was to live at the same time as a blessed prophet loved and chosen by Allah, to see him and to know him.

Allah sent down a revelation about the shallow behavior of these people who raised their voices and interrupted conversations. He revealed that their good deeds would count for nothing:

“You who believe! Do not put yourselves forward in front of Allah and of His Messenger; and have fear of Allah. Allah is All-Hearing, All-Knowing. You who believe! Do not raise your voices above the voice of the Prophet and do not be as loud when speaking to him as you are when speaking to one another, lest your actions should come to nothing without your realizing it.” (Al-Hujurat: 1-2)

As you see, this verse is addressed to those who have faith. These people once lived in the vicinity of the Prophet (Peace and blessings be upon him), could enter his house and engage in conversation with him. In these verses, Allah points out that people of shallow character may live among believers, but have no real sense of religious morality. They feel no real love or respect in their hearts for those who have faith.

This lack of respect could never be observed in devout believers. They fear Allah and speak in a way that makes others feel comfortable. Their fear of Allah leads them to be in a highness of character mastered by sincerity and modesty. For this reason, believers speak plainly and clearly. They say openly what they think and never use innuendo to express what they feel. They regard it as unfitting to say anything disrespectful that would plant doubt or resentment in the heart of another. This conscientious, intelligent and fine fashion is seen not only in how they speak to others but also in their logic and behavior. We can easily understand from what Allah says in the Qur’an that believers are meticulous about showing respect:

“…Those who lower their voices when they are with the Messenger of Allah are people whose hearts Allah has tested for heedfulness. They will have forgiveness and an immense reward.” (Al-Hujurat: 3)

Just as sincere Muslims have good spirit and noble character, so those who adopt the religion of superficiality have debased spirits and ignoble characters. Even if such people were in the same company with Muslims, they would not change themselves. They feel no need to develop and improve themselves. Because they have shrouded their consciences and followed the path of Satan, they do not find it necessary to compare the good and refined behavior of Muslims with their own crude, superficial moral quality. Pleased with their intelligence, they regard their superficial behavior as natural. These people’s situation is like that of a fish; it swims in water and knows nothing of the world above it. However, those of shallow character who lived in the Age of Happiness had our respected and honorable Prophet (Peace and blessings be upon him) whom they could take as an example:

“You have an excellent model in the Messenger of Allah, for all who put their hope in Allah and the Last Day and remember Allah much.” (Al-Ahzab: 21)

As Allah says in the Qur’an, the Prophet (Peace and blessings be upon him) is the best example for humanity in all ways.

But whether in the past or present, those who have adopted the religion of superficiality cannot experience the noble quality of Muslim behavior as revealed by Allah in the Qur’an and seen in the life of the Prophet (Peace and blessings be upon him). Those with weak faith, narrow minds and dull intellects cannot bring the morality of the Qur’an into their lives. Their spiritual state is revealed in how they think and speak, in their crude sense of humor and the means of entertainment they choose, in their lack of aesthetic sense and in their unseemly behavior.