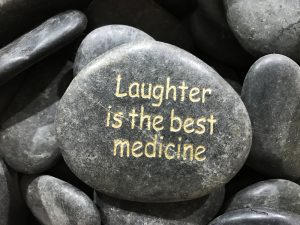 The Prophet had a good laugh and so did his companions.

In spite of the fact that he fought in the battles of Badr, Uhud, Khandaq and other major encounters, An-Nuayman ibn Amr remained a light-hearted person who was quick at wordplay and who loved to play practical jokes on others.

He belonged to the Banu an-Najjar of Madinah and he was among the early Muslims of the city. He was one of those who pledged allegiance to the Prophet (peace be upon him) at the Second Pledge of Aqabah.

He established links with the Quraish when he married the sister of Abdur-Rahman ibn Awf and later Umm Kulthum the daughter of Uqbah ibn Abi Muayt. She had obtained a divorce from her husband Az-Zubayr ibn al-Awwam on account of his harshness and severity.

Once An-Nuayman went to the market and saw some food being sold which appeared to be tasty and delightful. He ordered some and sent it to the Prophet as if it were a gift from him.

The Prophet was delighted with the food and he and his family ate of it. The vendor of the food then came to An-Nuayman to collect the price of it and An-Nuayman said to him: “Go to the Messenger of God it was for him. He and his family ate it.” The vendor went to the Prophet who in turn asked An-Nuayman: “Didn’t you give it to me?” “Yes,” said An-Nuayman. “I thought you would like it and I wanted you to eat some of it so I had it presented to you. But I don’t have any money to pay the vendor for it. So, pay, O Messenger of God!” The Prophet had a good laugh and so did his companions. The laugh was at his expense, literally, for he had to pay the price of the unsolicited gift. An-Nuayman felt that two benefits came out of the incident: the Prophet and his family ate food that they enjoyed and the Muslims had a good laugh.
Once Abu Bakr and some companions went on a trading expedition to Busra. Various people on the trip were given fixed duties. Suwaybit ibn Harmalah was made responsible for food and provisions. An-Nuayman was among the group and on the way he became hungry and asked Suwaybit for some food. Suwaybit refused and an-Nuayman said to him:
“Do you know what I would yet do with you?” and went on to warn and threaten him but still Suwaybit refused. An-Nuayman then went to a group of Arabs in the market and said to them: “Would you like to have a strong and sturdy slave whom I can sell to you.” They said “of Course and An-Nuayman went on: “He has a swift tongue and is very articulate. He will resist you and say: ‘I am free.’ But don’t listen to him”
The men paid the price of the slave – ten pieces of gold and An-Nuayman accepted it and appeared to complete the transaction with business-like efficiency. The buyers accompanied him to fetch theft purchase.

Pointing to Suwaybit, he said: “This is the slave whom I sold to you.” The men took hold of Suwaybit and he shouted for dear life and freedom. “I am free”. I am Suwaybit ibn Harmalah…” But they paid no attention to him and dragged him off by the neck in shackles as they would have done with any slave.

All the while, an-Nuayman did not laugh or batter an eyelid. He remained completely calm and serious while Suwaybit continued to protest bitterly. Suwaybit’s fellow travelers, realizing what was happening, rushed to fetch Abu Bakr, the leader of the caravan, who came running as fast as he could. He explained to the purchasers what had happened and so they released Suwaybit and had their money returned. Abu Bakr then laughed heartily and so did Suwaybit and an-Nuayman. Back in Madinah, when the episode was recounted to the Prophet and his companions, they all laughed even more.
A man once came to the Prophet on a delegation and tied his camel at the door of the Mosque. The Companions noticed that the camel had a large fat hump and their appetite for succulent tasty meat was stimulated. They turned to An-Nuayman and asked: “Would you deal with this camel?” An-Nuayman understood what they meant. He got up and slaughtered the camel. The nomad Arab came out and realized what had happened when he saw people grilling, sharing out and eating meat. He shouted in distress: “Oh my camel, what have you done!” The Prophet heard the commotion and came out. He learnt from the Sahabah what had happened and began searching for An-Nuayman but did not find him. Afraid of being blamed and punished, an-Nuayman had fled. The Prophet then followed his footprints. These led to a garden belonging to Danbaah the daughter of az-Zubayr, a cousin of the Prophet. He asked the companions where an-Nuayman was. Pointing to a nearby ditch, they said loudly so as not to alert an-Nuayman: “We haven’t found him, O Messenger of God.” An-Nuayman was found in the ditch covered with palm branches and leaves and emerged with dirt on his head, beard and face. He stood in the presence of the Prophet who took him by the head and dusted the dirt from his face while he chuckled with laughter. The companions joined in the mirth. The Prophet paid the price of the camel to its owner and they all joined in the feast.
The Prophet obviously regarded an-Nuayman’s pranks for what they were; light-hearted jokes that were meant to create some relief and laughter. The religion of Islam does not require people to disdain seemly laughter and levity and remain perpetually gloomy. An appropriate sense of humor is often a saving grace. An-Nuayman lived on after the Prophet and continued to enjoy the affection of Muslims. But did he put an end to his laughter?

During the caliphate of Uthman, a group of Companions were sitting in the Masjid. They saw Makhramah ibn Nawfal, an old man who was about one hundred and fifteen years old and obviously rather senile. He was related to the sister of Abdur-Rahman ibn Awf, who was a wife of an-Nuayman. Makhramah was blind. He was so weak that he could hardly move from his place in the Mosque. He got up to urinate and might have done so in the Mosque. But the companions shouted at him to prevent him from doing so.

An-Nuayman got up and went to take him to another place, as he was instructed. What is this other place that an-Nuayman took him to? In fact he took him only a short distance away from where he was sitting at first and sat him down. The place was still in the Mosque! People shouted at Makhramah and made him get up again all in a frenzy. The poor old man was distressed and said: “Who has done this?” “An-Nuayman ibn Amr,” he was told.
The old man swore and announced that he would bash An-Nuayman on the head with his stick if he should meet him. An-Nuayman left and returned. He was up to some prank of his again. He saw Uthman ibn Affan, the Commander of the Faithful, praying in the Mosque. Uthman was never distracted when he stood for Prayer. An-Nuayman also saw Makhramah. He went up to him and in a changed voice said: “Do you want to get at an-Nuayman?” The old man remembered what an-Nuayman had done. He remembered his vow and shouted: “Yes, where is he?” An-Nuayman took him by the hand and led him to the place where the Caliph Uthman stood and said to him: “Here he is!” The old man raised his staff and bashed the head of Uthman and the people shouted: “That’s the Commander of the Faithful!” They dragged Makhramah away and some people set out to get an-Nuayman but Uthman restrained them and asked them to leave him alone. In spite of the blows he had suffered, he was still able to laugh at the deeds of An-Nuayman. An-Nuayman lived up to the time of Muawiyah when a trial between the believers saddened him and discord filled him with anguish. He lost his humor and laughed no more.