The Merits of Hajj 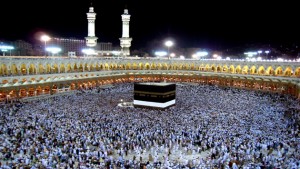 Hajj helps forgive past sins. Abu Hurairah reported: I heard the Prophet as saying: “Whoever performs Hajj and does not commit any obscenity or commit any evil will go back (free of) sin as on the day his mother bore him.” (Agreed-on hadith)

Paradise is the promised reward for accepted Hajj. It is also reported on the authority of Abu Hurairah that the Prophet said: “From one `Umrah to another is expiation for whatever (sins) come in between them, and an accepted Hajj brings no less a reward than Paradise.” (Agreed-on hadith)

Was Hajj to Mecca Something Innovated by Islam?

The Qur’an tells us Prophet Abraham and his son Prophet Ishmael rebuilt the Ka`bah. We read:

And [mention] when Abraham was raising the foundations of the House and [with him] Ishmael, [saying], “Our Lord, accept [this] from us. Indeed You are the Hearing, the Knowing. (Al-Baqarah 2:127)

The Qur’an also tells us that God charged Prophet Abraham and Prophet Ishmael with purifying the House of God in Mecca for worshippers. We read:

And We charged Abraham and Ishmael, [saying], “Purify My House for those who perform Tawaf and those who are staying [there] for worship and those who bow and prostrate [in prayer].” (Al-Baqarah 2:125)

The Qur’an informs us that God commanded Prophet Abraham to proclaim Hajj to people. We read:

And [mention, O Muhammad], when We designated for Abraham the site of the House, [saying], “Do not associate anything with Me and purify My House for those who perform Tawaf and those who stand [in prayer] and those who bow and prostrate.

Is Hajj Obligatory for Muslims?

Hajj (Major Pilgrimage) is obligatory for each capable Muslim once in one’s lifetime, for Hajj is one of the five pillars of Islam. In the Qur’an, God says:

And [due] to God from the people is a pilgrimage to the House – for whoever is able to find thereto a way (Aal `Imran 3:109)

However, a Muslim is still recommended to make Hajj and `Umrah more than once. In the Qur’an, God says:

And whoever volunteers good – then indeed, God is appreciative and Knowing. (Al-Baqarah 2:158)

What are the Rites of Hajj?

The main rites of Hajj are as follows:

What are the Rites of `Umrah?

The main rites of `Umrah are as follows:

What are the Types of Hajj?

There three types of Hajj as follows:

What is the prescribed Time of Hajj?

Most rites of Hajj take place in the lunar month of Dhu Al-Hijjah. However, some of the preliminary rites of Hajj may be performed in Shawwal and Dhu Al-Qi`dah.

What are Restrictions of Hajj?

After getting into until getting out of the state of Ihram, a pilgrim must avoid, inter alia, the following: