There are certain times for Hajj, and certain locations for entering the state of ihram.

First: The Fixed Times of Hajj

The times specified for Hajj are mentioned by Allah, Exalted be He, when He says:

“Hajj is [during} well-known months, so whoever has made Hajj obligatory upon himself therein [by entering the state of ihram, there is [to be for him] no sexual relations and no disobedience and no disputing during Hajj…” (Quran: Al-Baqarah: 197)

These months are: Shawwal, Dhul-Qa’dah, and the first ten days of Dhul-Hijjah. Therefore, anyone who enters the state of ihram in these months with the intention to perform Hajj must avoid offensive words and deeds which contradict the purity of that act of worship, and should also be preoccupied with good deeds and abide by piety.

Second: The Locations for Entering the State of Ihram 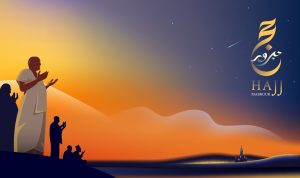 A Muslim should be aware of Miqats and never pass them without being in a state of ihram.

They are the specific places where a pilgrim must not exceed and head for Mecca without entering the state of ihram (a state of ritual consecration during Hajj or ‘Umrah) at them, declaring his intention to perform Hajj. These places were pointed out by the Prophet (peace be upon him) as mentioned in the narration of ‘Abdullah lbn ‘Abbas who said:

Moreover, Imam Muslim related on the authority of Jabir that the Prophet (peace be upon him) said; “. . The muhall (the site for entering the state of ihram) of the people of Iraq is Dhat- ‘Irq.” (Muslim)

The wisdom of setting such Miqats

The idea behind setting such miqats (the sites for entering the state of ihram) for Hajj is as follows: The House of Allah (the Ka’bah), being so glorified and honored by Allah, is fortified by Allah through Mecca and protected by the Sanctuary of Mecca which, in turn, is glorified by those miqats beyond which one cannot pass without being in the state of ihram as a sign of honor and glorification to the House of Allah.

Third: The Locations of Ihram

The farthest of these sites for entering ihram is Dhul-Hulaifah, a place southwest of Madinah and 18 km from its mosque. It is the miqat for the people coming from Madinah and beyond.

As for the people of Ash-Sham (the Levant; the region covering Syria, Lebanon, Jordan, and Palestine), Egypt and Morocco, the site for ihram is Al-Juhfah which is 187 km to the northwest of Makkah.

It was on the eastern coast of the Red Sea, but it has completely disappeared and Rabigh (to the north of Al-Juhfah) is used as the substitute for this miqat now.

Yalamlam, 54 km to the south of Makkah. It is the miqat for those coming from Yemen and the pilgrims who pass by it.

The site for ihram (a state of ritual consecration during Hajj or ‘Umrah) for the people of Najd and the pilgrims who pass by it is Qarn Al-Manazil – now known as As-Sayl – which is 94 km to the east of Makkah.

As regards the people of Iraq and those of the East, the site for ihram is Dhat-‘ Irq which is 94 km to the northeast of Makkah.

These are the sites for entering ihram for the people of the aforesaid places and those passing through them with the intention of performing Hajj or “Umrah.

E-Da`wah Committee presents this map as an illustrated guide to explain the different places of Ihram.

The place of Ihram for the people of Makka (Mecca)

Regarding those who dwell in places that are nearer to Mecca than the aforementioned places, they assume ihram for Hajj or ” Umrah from their places. As mentioned above, the residents of Mecca, however, enter ihram for Hajj from their own residence, i.e. from places at Mecca itself; they do not have to get out of Mecca to assume ihram from there. However, when it comes to ‘ Ummh, they have to get out of Mecca to the nearest precincts wherefrom they can assume ihram.

As for those who do not pass by any of the aforesaid sites of ihram on their way to perform Hajj, they have to assume ihram once they know they are at the nearest place opposite to any of these sites.

Al-Bukhari related that ‘Umar Ibnul-Khattab (may Allah be pleased with him) said to the people of Iraq:

“Make your site for ihram a place situated opposite to it (i.e. opposite to Qarn Al-Manazil, the place of ihram for the people of Najd) on your usual way.” (Al-Bukhari)

Fourth: How to Enter the State of Ihram while on a Plane?

Those who travel by plane should assume ihram once they know that they are parallel to any of the sites for ihram during the flight. However, they should be prepared before getting on board the plane by ritual bathing and cleaning. Afterwards, whenever the plane reaches a place that is parallel to any of the aforesaid sites for ihram, they should declare the intention of ihram and chant talbiyah in the plane.

It is impermissible for one to delay ihram until the plane lands in the airport of Jeddah as some pilgrims mistakenly do, as both Jeddah and Bahrah are not sites for ihram except for their own people or anyone who intends to perform Hajj or ‘Umrah while being there. Otherwise, it is impermissible to assume ihram from Jeddah, as it will be regarded as negligence of one of the rites of Hajj, namely assuming ihram from one of its decreed sites, and one in this case will be obliged to slaughter a sacrificial animal in expiation.

Here is a common mistake made by many people and it has to be pointed out; some people mistakenly believe that they have to take a ritual bath before assuming ihram, arguing that this is not possible while being in a plane and so on. Therefore, it is important to point out that ihram means declaring the intention to perform the rites of Hajj or ‘Umrah, avoiding the acts prohibited to be done while being in a state of ihram as much as possible. As for washing, wearing perfumes, and the like, they are acts of the Sunnah which a Muslim can do before getting on board the plane, and assuming ihram without observing them is permissible. So, a plane passenger can make the intention to assume ihram and recite talbiyah while being in his/her seat once the plane is over any of the known sites for ihram or just before it.

This is known by asking the pilots or the hostesses of the plane, or trying to find it out independently through investigation and estimation. Thus, one would have done ones utmost in this regard. However, if one does not care, it will be considered an inexcusable negligence and indifference regarding one of the prerequisites of Hajj and ‘Umrafi, namely ihram, which may invalidate them.

Fifth: What to Do if You Miss the Location of Ihram?

As for those who pass by their site of ihram without assuming it, they have to return to that site and assume ihram, for it is a manageable obligation that should never be neglected. So, if one does not go back and assume ihram from the right site – as some mistakenly do from Jeddah and the like – one in this case will be obliged to slaughter a sacrificial animal in expiation, i.e. to slaughter a sheep or to get one-seventh of a camel or one-seventh of a cow and divide it among the residents of the Sanctuary of Mecca, provided one (the pilgrim who sacrifices) should eat nothing from it.

In a nutshell, Muslims should take an interest in their religious matters so as to perform all acts of worship properly and perfectly as legally enjoined.

Among these religious matters is the ihram for Hajj and ‘Umrah; it has to be assumed from the sites for ihram specified by the Prophet (PBUH). Therefore, a Muslim should be aware of these sites and never pass them without being in a state of ihram.