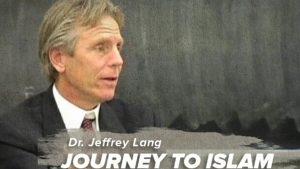 For those whom Islam has embraced, the greatest witness to God’s unremitting, pursuing, sustaining, and guiding love is the Qur’an. Like a vast and magnificent ocean, it lures you deeper and deeper into its dazzling waves until you are swept into it.

But instead of drowning in a sea of darkness, you find yourself immersed in an ocean of divine light and mercy … as I read the Qur’an and prayed the Islamic prayers, a door to my heart was unsealed and I was immersed in an overwhelming tenderness.

Love became more permanent and real than the earth beneath my feet; its power restored me and made it so that even I could feel love … I was happy enough to have found faith in a sensible religion. But I never expected to be touched by such intoxicating mercy.

“Dad, do you believe in Heaven?” When young Jeffery asked his father about the existence of heaven as they walked their dog along the beach, it was apparent that this child possessed a highly inquisitive mind. There perhaps was also a sign that he would subject things to a logical scrutiny and validate them from a rational perspective. It was little surprise that one day he would end up being a professor of mathematics, a matter subject that leaves no place for anything but logic.

During his senior years at the Notre Dame Boys High, a Catholic school, he formed certain rational objections against belief in the existence of a Supreme Being. Discussions with the school priest, his parents, and classmates could not convince him of the existence of God, and to the dismay of the priest and his parents, he turned into an atheist at the age of eighteen. He was to remain so for the next ten years, throughout his undergraduate, graduate, and doctoral studies. It was a little after his becoming an atheist that he first saw the following dream:

It [sic] There was a tiny room with no furniture, and there was nothing on its grayish-white walls. Its only adornment was the predominantly red-and-white patterned carpet that covered the floor. There was a small window, like a basement window, above and facing us, filling the room with bril­liant light. We were in rows; I was in the third. There were only men, no women, and all of us were sitting on our heels and facing the direction of the window.

It felt foreign. I recognized no one. Perhaps I was in another country. We bowed down uniformly, our faces to the floor. It was serene and quiet as if all sound had been turned off. All at once, we sat back on our heels. As I looked ahead, I realized that we were being led by someone in front who was off to my left, in the middle, below the window. He stood alone. I only had the briefest glance at his back. He was wearing a long white gown, and on his head was a white scarf with a red design. And that is when I would awaken.

During the next ten years of his atheist life, he was to see the same dream several times. He would not be disturbed by the dream, however, for he would feel strangely comfortable when he awoke. But not knowing what it was, he could not make any sense out of it and thus gave no importance to it despite its repetitions. Ten years later in his first lecture at the University of San Francisco, he met a Muslim student who attended his mathematics class.

He was soon to develop a friendship with him and his family. Religion, however, was not the topic of discussion during the time he shared with that Muslim family, and it was much later that one of the family members handed to him a copy of the Qur’an. He was not looking for a religion. Nevertheless, he started reading the Qur’an, but with a strong prejudice. “You cannot simply read the Qur’an, not if you take it seriously. You either have surrendered to it already or you fight it. It attacks tenaciously, directly, personally; it debates, criticizes, shames, and challenges.

From the outset, it draws the line of battle, and I was on the other side.” Thus he found himself in an interesting battle. “I was at a severe disadvantage, for it became clear that the Author knew me better than I knew myself.” It was as if the Author was reading his mind. Every night he would make up certain questions and objections but would find the answer in his next readings as he continued his readings in the accepted order. “The Qur’an was always way ahead of my thinking; it was erasing barriers I had built years ago and was addressing my queries.”

He fought vigorously with objections and questions, but it was apparent that he was losing the battle. “I was being led, working my way into a corner that contained only one choice.” It was early 80’s and there were not many Muslims at the University of San Francisco campus. He discovered a small place at the basement of a church where a few Muslim students made their daily prayers. After much struggle in his mind, he came up with enough courage to go and visit that place.

When he came out of that place a few hours later, he had already declared the shahadah, the proclamation of a new life, “I bear witness that there is no god but Allah, and I bear witness that Muhammad is His messenger.” After he made his proclamation, it was the time for the afternoon prayer and he was invited to participate. He stood up in rows with other students behind a prayer leader named Ghassan and started following them in prayer and:

We bowed down in prostration with our faces on the red-and-white carpet. It was serene and quiet as if the sound had been turned off. And then we sat back on our heels again.

As I looked ahead, I could see Ghassan, off to my left, in the middle, below the window that was flooding the room with light. He was alone, without a row. He was wearing a long white gown and on his head was a white scarf with a red design.

The dream! I screamed inwardly. The dream exactly! I had forgotten it completely, and now I was stunned and frightened. Am I dreaming? I wondered. Will I awaken? I tried to focus on what was happening to determine whether I was asleep. A rush of cold flowed through my body, making me shudder. My God, this is real! Then the coldness subsided, succeeded by gentle warmth radiating from within. Tears welled up in my eyes.

Everyone’s journey to Islam is unique, varying from one another in many different ways, but Dr. Lang’s is an interesting one. From one who had once challenged the existence of God, he became a firm believer in God. From a warrior who fought a fierce battler against the Qur’an, he became one who surrendered to it. From one who never knew love and who only wanted to live a comfortable materialistic life until he died and become “long-forgotten soil underneath an unmarked grave,” he turned into one whose life became full of love, mercy, and spiritualism.

“God will bring you to your knees, Jeffery!” said his father when he denied the existence of God at the age of eighteen. Ten years later, that became a reality. He was now on his knees and his forehead on the ground. The highest part of his body that contained all of his knowledge and intellect was now on the lowest ground in complete submission before the majesty of God. Like all Muslim reverts, Dr. Lang felt that he was favored by God’s mercy and that it was God Himself who directed him to Islam:

I perceived that God was always near, directing my life, creating the circumstances and opportunities to choose, yet always leaving the crucial choices to me. I was awestruck by the realization of the intimacy and love that reveals, not because we deserve it, but because it is always there and all we have to do is turn to Him to receive it. I cannot say with certainty what the meaning of that vision was, but I could not help seeing in it a sign, a favor, and a new chance.

Dr. Lang is the author of two books — both make interesting readings and are useful for both Muslim converts and born Muslims to read. He is married and has three daughters. It is no surprise that his children inherited some of his inquisitive mind. The boy who once threw questions at his father was now a father himself who had to face questions from his own children. One day he was confronted by his eight-year-old daughter Jameelah after he finished the noon prayer with her:

Daddy, why do we pray?

Her question caught me off guard. I didn’t expect it from an eight-year-old. I knew, of course, the most obvious answer — that as Muslims we are obligated to — but I did not want to waste the opportunity to share with her the experience and benefits of salah. Nevertheless, as I tried to put together a reply in my mind, I bought a little time by beginning with, “We pray because God wants us to!”

But why, daddy, what does praying do? She asked.

It is hard to explain to a young person, honey. Someday, if you do the five prayers every day, I’m sure you’ll understand, but I’ll do my best to answer your question.

You see, sweetheart. God is the source of all the love, mercy, kindness, and wisdom — of all the beauty — that we experience and feel. Like the sun is the source of the light we see in the daytime, God is the source of all of these and much more. Thus, the love I feel for you, your sisters, and mommy is given to me by God. We know that God is kind and merciful by all the things He has given us in this life. But when we pray, we can feel God’s love, kindness, and mercy in a very special way, in the most powerful way.

For example, you know that mommy and I love you by the way we take care of you. But when we hug you and kiss you, you can really feel how much we love you. In a similar way, we know that God loves and is kind to us by the way He takes care of us. But when we pray, we can feel His love in a very real and special way.

Does praying make you a better daddy? She asked me.

I hope so and I would like to think so, because once you are touched by God’s love and kindness in the prayer, it is so beautiful and powerful, that you need to share it with those around you, especially your family. Sometimes, after a hard day at work, I feel so exhausted that I just want to be alone. But if I feel God’s kindness and mercy in the prayer, I look at my family and remember what a great gift you are to me, and all the love and happiness I get from being your daddy and mommy’s husband. I’m not say­ing that I am the perfect father, but I believe I would not be as good a father without the prayers. Am I making any sense at all?

I kind of understand what you mean, Jameelah answered.

Then she hugged me and said, and I love you, Daddy!