Women and the Society

A woman in today’s society is not free from scrutiny about how she meant to dress, behave, or appear in public. The public eye falls on every woman who strolls within its purview and its perception is often one that is rigid and judgmental. Physical beauty essentially becomes the talk of the season, every season, as the definition of physical beauty changes like the clouds.

One season, beautiful women are those who are skinny with a certain haircut – maybe one that is straight – so the trend follows: women of all ages begin to “diet” into the prescribed form of beauty and cough up their savings for rebonding hair treatments.The next season’s color of beauty is sandy dust and pointed shoes to elongate the legs. The trend then forces women to adhere to the “norm” by scouring beauty stores for sandy dust hair dye and shoe stores for pointy shoes. 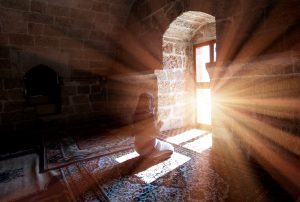 Islam prescribes hijab for Muslim women to protect themselves from this shallow definition of perfection.

Physical beauty is a never-ending debate. Face lifts, new diets, clothes, and more clothes and cosmetics represent lucrative industries where the perception of beauty changes and alters and is ultimately forced upon women who fall prey to this form of material perfection. Islam has other ideas, though. It prescribes hijab for Muslim women to protect themselves from this shallow definition of perfection. With the use of this Muslim dress code, women are no longer required to follow trends of the season.

Women are allowed in their homes and to their spouses to make their eyes look bigger, put on make-up and they are even “allowed” to be a little overweight. Physical beauty in Islam is guarded through the sanctity of marriage where spouses are described as being “garments” for each other.

The perfect woman is therefore defined differently in Islam. Though a woman may still be physically attractive to her husband, her public image is a different one, where her inner beauty plays a far more prominent role in her appearance and behavior.

The Women of Perfection

The four perfect women recognized by Islam are well known by Muslims. They are: the Virgin Mary, the mother of Prophet Jesus, Asya, the wife of Pharaoh, Lady Khadijah, the Prophet’s first wife, and Lady Fatimah, the youngest daughter of the Prophet Muhammad (peace be upon him).

Fatimah the daughter of Prophet Muhammad, in particular, was a young girl during the time Islam was introduced. So from her youth – as a daughter, later a wife and a mother – the perfection of a Muslim as defined by Islam surfaces through Lady Fatimah.

Lady Fatimah is described to be one of the great women in Islam. She played an important role in her father’s mission, thus is recognized as the perfect role model for women. The below verse describes the sanctity of the Prophet’s household, including Lady Fatima.

[And stay quietly in your houses, and make not a dazzling display, like that of the former times of ignorance; and establish regular Prayer, and give regular Charity; and obey Allah and His Messenger. And Allah only wishes to remove all abomination from you, ye members of the Family, and to make you pure and spotless.] (Al-Azhab 33:33)

In many reports, she was barely five when Prophet Muhammad received his first revelation at Mount Hira’. As a child, she had witnessed gross calamities inflicted upon her parents and even at times she fell victim to the taunts of the Quraish. Unlike some children today who have to deal with playground bullying or peer pressure, Lady Fatima endured physical, mental and spiritual pain as she watched her father being humiliated by the pagan Arabs as they labeled him as being “mentally insane.”

One story even relays a scene at the Kabah where one of the Prophet’s opponents discarded rubbish on Prophet Muhammad’s head while he was prostrating to God. With a teary eye and a wrenched heart, the young Fatimah cleaned her father as he pacified his favorite daughter by telling her that he could endure personal insults, as long as they were not directed towards Islam. Maybe it was through Lady Fatimah’s endurance throughout her childhood that Prophet Muhammad held her in high regard throughout his lifetime.

When she was older, and even married, she would nurse her father through to recovery when he was injured during war. It was reported that on occasions where food was scarce, he would visit his daughter first to ensure that she had enough sustenance, before tending to his own needs. Similarly, Lady Fatimah would visit her father if he were in need, without regretting any sacrifices she would make for him.

Also, when Lady Fatima entered a room that was occupied by Prophet Muhammad, he would immediately rise to greet her, kiss her forehead, and offer her his vacated seat. She would return the gesture when their roles were reversed. Her marriage to Ali ibn Abi Talib, the Prophet’s cousin, was a happy one. The wedding is often described as one of the most lavish weddings in Madinah. It was sponsored by her father, as Ali was a poor man.

In fact, Lady Fatimah was the only one of Prophet Muhammad’s daughters who did not marry a rich merchant. Prophet Muhammad encouraged the union, knowing very well that Ali was a pious Muslim and one that would look after his youngest daughter until death parted them. Lady Fatimah braced married life bravely and worked to help her husband to provide for their family. Besides the grueling conditions that she worked in, she was also a mother to two baby boys the older is named Hassan and the younger is Hussein.

She was a loving daughter, loyal wife, and doting mother. She persisted through the hardship that burdened her throughout her life, without even a whimper. How many women today are able to do that without being swayed by the latest fashion statements?

Contemporary culture often talks about the physical appearance of a woman, one that has to be inherently attractive. But Muslims, and Muslim women in particular, learn that inner beauty outweighs beauty on the outside. This has been portrayed by pious Muslim women who observe the Muslim dress code and adhere to good Muslim behavior.

They are those who provide for the needy, relieve the burdens of their husbands, raise their children as believers, love their parents, and strive for personal improvement, whether it is through their careers, interests, or hobbies. Every act of a good Muslim is done for the sake of Allah.

Are Muslim daughters today growing up to be remotely close in demonstrating Lady Fatimah’s demeanor and faith? Fatimah was exposed to violence and oppression at a young age and she blossomed into becoming one of the most pious Muslims in the history of Islam, and is recognized by Allah as one of the perfect Muslim women.

It does not mean that young Muslim daughters today have to be exposed to violence and oppression the way Prophet Muhammad and his family had been to flourish into becoming believing women.

But the overwhelming levels of materialism that is inherent in today’s culture, especially the shallow definition of perfection, dampens hopes that young Muslim women today will prescribe to Lady Fatimah’s formula in striving for perfection.

There is only one Fatimah, the one and only Lady Fatimah. To Fatimah the Prophet Muhammad said: “Thou art the highest of the women of the people of Paradise, excepting only the Virgin Mary, daughter of Imran,” (Lings, 1983).

It is difficult for women not to be swayed by the idea of contemporary perfection. The media bullies women into thinking that without a certain asset, accessory, or cosmetic case, they will fade into becoming bland individuals for being less attractive and less perfect. Imagine striving for perfection amidst fashion faux-pas and the latest cosmetic discoveries.

Now imagine striving to socialize with Lady Fatimah in Paradise. Imagine mingling with her amongst other believers who withdrew from the pressures of contemporary perfection. The reminder of Lady Fatimah as a perfect Muslim woman is one to lean on, whether a Muslim woman is a daughter, wife or mother. Regardless of personal interests, hobbies, networks, social circles, or career prospects, a woman’s duty – like that of a Muslim man’s – is towards Allah and his covenants.

The shallow world of materialism has no place in the hearts of believing Muslim women.

Source: muslimsincalgary.ca with some modifications

Originally from Malaysia, Maria Zain was a freelance writer based in Nottingham, United Kindgom. Maria was also a certified Childbirth Educator (AMANI Birth Institute), and a home-educating Muslim mother of six. She passed away on 28 December 2014. May Allah have mercy on her!