If you’re a new Muslim or a non-Muslim who has read, is reading, or thinking about reading the Qur’an, then that’s great. There is way too much misquotation, misrepresentation, and, simply, false accusations attributed to the Qur’an, and the best way to truly understand the book is, well, by reading it.

However, picking up the book and just reading it is not enough. There are many things you need to understand about the Qur’an before you begin reading. Here, I shed light on just two important points, which I believe are the most vital. 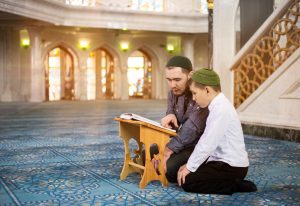 There are many things you need to understand about the Qur’an before you begin reading.

The Uniqueness of the Arabic Language

It’s not easy at all to translate Arabic into English or into any other European language for that matter. Arabic to English translations are not done word for word, like how, for example, German to English would be translated. This is because not every Arabic word has an exact English equivalent. So what translators have to do is find the closest matching word or combination of words to try and get the sentiment, tense, tone and emphasis found in the original Arabic across. Essentially, when you read an English Qu’ran, you can’t actually say you are reading a translation of the Qur’an. In fact, you are reading someone’s attempt to bring the apparent meaning of the Qur’an into English.

Even those scholars and academics who are native Arabs or well-versed in Arabic struggle to understand the Arabic of the Qur’an. This is why there are so many commentaries and interpretations written with scholars giving their opinions on the meanings, both apparent and hidden.

Therefore, you can appreciate the task at hand as a reader of an English Qu’ran.

A very good English version I would recommend is this one as it has important footnotes and explains when each chapter was revealed.

How the Qur’an Was Revealed

The Holy Qu’ran was not a complete book or scroll given to the Prophet Muhammad by God, via Archangel Gabriel. It was gradually revealed to the Prophet over twenty-three years.

Academics give various reasons as to why this was the case. For example, to give people a chance to slowly absorb the contents of their newfound faith and not to cause an information overload.

Whilst these and other reasons are likely to be true, what is definitively true is that often (not all the time) a portion of the Qur’an was revealed in response to either questions people asked to the Prophet, due to the actions of the people, community, or general occurrences of the time.

Almost no verse was revealed without context or reason.

Many people cite chapter 47, verse 4 to conclude Islam as an intolerant religion that wishes to kill anyone who stands in its way. People only use a portion of the verse too, as it reads:

“Therefore when you meet the disbelievers, smite their necks.” (Quran 47:4)

On face value this sounds like a very violent and intolerant act. You can start to understand the verse better if you know the context, which is as follows.

The non-Muslim Arabs were very unhappy about the rising popularity of Islam and wished to battle and kill the Muslims. The command in the aforementioned verse came from God permitting the Muslims to kill the disbelievers in battle, as a form of defence.

The verse was revealed in the context of a battlefield, with a grave threat to the lives of the Muslims at a time when people coming to Islam were being heavily persecuted, and God is saying you are allowed to defend yourself during this battle. It is therefore not a statement made in vacuum to indiscriminately go out and kill people who did not believe, but disbelievers who persecuted Muslims.

I bet if someone wanted to kill you, you would not wait for a go ahead to defend yourself, because it would be well within your rights and anybody would understand your natural defensive response.

Another Example That Shows the Importance of Context

Another verse that is heavily used to accuse Islam of being violent is chapter 2, verse 191, which reads:

Context, guys! All one need to do is read the verses before and after this verse to understand what this really means. The verse before (190) says:

“Fight in the way of God those who fight you but do not transgress. Indeed. God does not like transgressors.” (Quran 2:190)

Here, God is saying to only fight those who fight you but do not transgress meaning do not use excessive or unnecessary force. And if someone continues to read the verse in contention (191), they will find that the rest of the verse says:

“…and expel them from wherever they have expelled you, and fitnah [persecution] is worse than killing. And do not fight them at al-Masjid al-Haram until they fight you there. But if they fight you, then kill them. Such is the recompense of the disbelievers.” (Quran 2:191)

Once again, the verse is instructing Muslims not to fight until the opposition fights them first. The verse after (192) says:

“And if they cease, then indeed Allah is Forgiving and Mericful.” (Quran 2:192)

“Fight them until there is no [more] fitnah and [until] worship is [acknowledged to be] for Allah. But if they cease, then there is to be no aggression except against the oppressors.” (Quran 2:193)

So to summarise, these verses are saying:

Sounds fairly rational to me.

As you can see, I’ve had to go into lengthy detail to explain just a few verses from the Qur’an. Now I hope you can appreciate the toil scholars go through to explain the Qur’an, especially those who have written volumes of commentary on it.

And I also hope you can appreciate why it irks Muslims when someone picks up an English version of the Qur’an, picks a random verse and says ‘Hey, look, this is what Islam is about’.

Be active, not passive readers and if you have questions, ask experts and do not assume.